England coach Eddie Jones was pleased with his team's Autumn Nations Cup victory over Ireland and declared there is more to come.

The Six Nations champions were rarely stretched by Andy Farrell’s men, who have now lost their last four games against England.

Despite having most of the possession and territory, the visitors’ only score, a Jacob Stockdale try, came with six minutes left as England, who made 238 tackles to Ireland’s 72, ran out 18-7 winners. 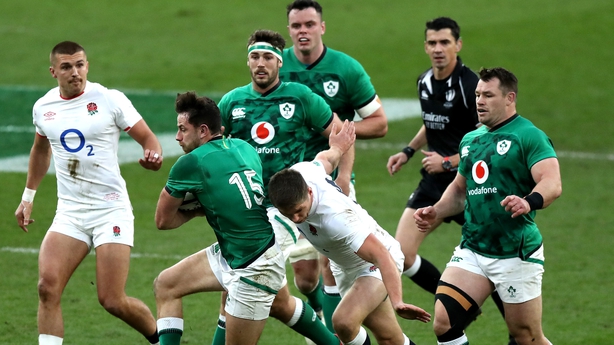 "We controlled most of the game," said Jones, whose side have won 27 of their last 30 home matches.

"We got a little bit loose and a run of penalties in the second half but that just shows how much more we've got in us.

"At times we dominated physically and we've got a bit more to go there."

Jonny May racked up his fourth and fifth tries against Ireland, who face Georgia next Sunday, with a first-half double, the second a stunning long-range individual effort.

May now sits joint second with Ben Cohen and Will Greenwood in the Red Rose try-scoring list on 31; Rory Underwood has 49.

"Jonny's right up there if you consider he's 30 and is still improving every aspect of his game," said Jones of the Gloucester winger, who won his 58th cap in Twickenham.

"He's such a dedicated trainer and is obsessed about getting better. He's a great role model for all the players in the teams.

"When you consider the player he was... I remember watching him in the 2015 World Cup and at one stage he was going to end up in Row K. Now he's a serious finisher."