Johnny Sexton suffered a "minor hamstring injury" against Dragons on Friday and will not be available for Leinster's Guinness Pro14 clash away to Benetton on Saturday.

The Ireland out-half was withdrawn "as a precaution" after 23 minutes of their win against the Welsh outfit at the RDS, the province said.

Andy Farrell's Ireland side are due to resume their Six Nations campaign against Italy in Dublin on 24 October.

"It's not that serious," Leinster backs coach Felipe Contepomi said.

"I think he’ll be fine, especially for the international games coming up.

"When it’s a precaution, and it’s a muscle we are making sure he’s getting all the strength to get back.

"If he can train this week it would be great but we are not going to hurry it."

Fellow Ireland international Max Deegan will have a scan to discover the extent of a knee injury suffered in the same game and is also unavailable this weekend but the Argentinian indicated that the 23-year-old would be out for a while.

"I can't say exactly how long but it’s not a minor one," he added of the back row forward.

"It’s not fully diagnosed yet. He has to be seen by a specialist. From there we’ll just plan his recovery. It looks more serious than a minor injury." 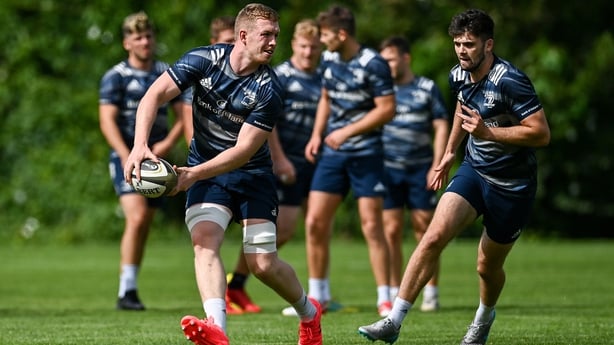 Flanker Dan Leavy, who has yet to make his comeback from a serious knee injury, "is being further managed this week" and not available for selection.

At the start of last month Leinster senior coach Stuart Lancaster said Leavy would be involved in the "near future" but he didn't feature over the end stages of the 2019/20 season.

Contepomi insisted that the Ireland forward had not suffered a setback, despite returning to the 'unavailable' list.

"It's like when you are coming back from such an injury, you have to be 100% available to get back.

"It takes a long time and the last thing you want to do is hurry, go back one or two weeks earlier, go back and reinjure because it’s not only the physical injury but the mental side of that."

Ciarán Frawley is following the graduated return to play protocols after coming off with a facial injury and won't be considered for the trip to Italy.

Andrew Porter and Dave Kearney (both hamstring) are being monitored and have not been ruled out at the moment.