Leinster and Ulster take on Saracens and Toulouse respectively this weekend in the Heineken Champions Cup quarter-finals and while the two Irish sides warmed up with a Guinness Pro14 final, the English champions and the Top 14 outfit had regular league business to attend to.

It's hard to know what exactly Ulster can take from Saturday night's 27-5 defeat to Leinster.

The second half of their semi-final against Edinburgh would have served to banish the demons from their poor showings in the double-header restart games at the Aviva, when they were comfortably second best to Connacht and Leinster.

However, apart from James Hume's excellent early try and prop Tom O’Toole's noteworthy outing, the confidence that was siphoned in Murrayfield must have ebbed away as they failed to land a punch on Leo Cullen’s side, their execution particularly worrying ahead of the visit to the Ernest-Wallon Stadium, which will have 5,000 home supporters in attendance.

Getting closer to Leinster or even finishing off any of their moves in promising positions would have given Dan McFarland's side a boost coming into Sunday's encounter (12.30pm).

"We can say we're battle hardened," said the Ulster boss as he tried to draw some positives ahead of the game.

Toulouse, on the other hand, started their Top 14 campaign two weeks ago and were within a late disallowed try of beating Clermont away.

That was despite, through a combination of yellow and red cards, playing with 14 men from the 25th minute and 13 from the 50th minute.

Below is the team that played and beat Ronan O'Gara's La Rochelle last night, 39-23.

"As usual, he broke the tackles (6)," they wrote (and google translated), "he offered breakthroughs of which he alone has the secret with five crossings.

"We never tire of seeing him play with his support. Able to initiate a sprint faster than any other player in the championship: a real shot. And the best part is when he concludes it with a try."

You can see highlights below.

Toulouse, under coach Ugo Mola, won six of their six pool games to qualify, second only to Leinster in the pecking order. Ulster are 11-point underdogs in some books.

Four-time champions Leinster could not be in better fettle coming into their home quarter-final with Saracens on Saturday (3pm).

The Blues are on a 24-game winning run this season and won the Pro14 final pulling up.

Knowing their had a bigger challenge on the horizon they could afford to leave Johnny Sexton on the bench, with the late leg-stretch at the Aviva priming their star man for this weekend's battle.

Saracens' mood, meanwhile, will have been boosted by a big win over top of the table Exeter, 40-17.

However, this game was a 2nds XV clash in all but name, featuring three players between the two squads who were present when the sides met in last year's Premiership final.

The Chiefs had already guaranteed a play-off place and Sarries have long since been relegated thanks to points deducted due to salary cap breaches.

Champions Cup holders Saracens, who will not take part in next year's competition, even if they win it outright, were also in action against Sale last Wednesday, when another largely second-string outfit lost away to Sale, 24-17.

So the last Saracens side that Mark McCall selected that will look anything like what shows up at Lansdowne Road was the one picked to face Wasps on 5 September. 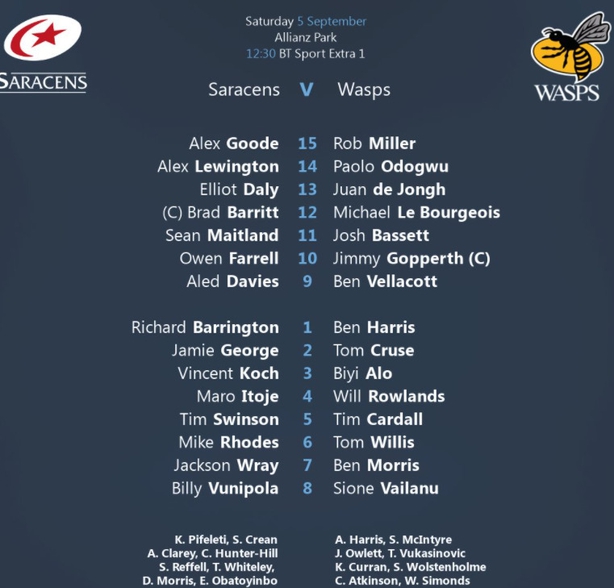 The game became infamous for Owen Farrell's high challenge and subsequent five-game ban, which rules the out-half out. He will likely be replaced by Alex Goode or Manu Vunipola.

But that talking point overshadowed the fact that Wasps, who fielded a weaker team on paper than the 2019 Premiership winners, were in control before Farrell's moment of madness on the hour mark.

A lot has gone against Saracens in 2020 but Leinster won't allow that to seep into their collective mentality.

The side is still full of talent and won't give up their trophy without a fight.