Leinster senior coach Stuart Lancaster says he wants referees to get the big calls right, and to allow the game to flow more, ahead of this Friday's Guinness Pro14 semi-final against Munster.

There has been some criticism of perceived inconsistencies in the implementation of rules from the men in the middle over the years, with just one Pro14 referee being picked for the panel at last year's World Cup in Japan.

That was Nigel Owens who, along with Andrew Brace, were the competition's two appointments for this season's Six Nations.

There were no fewer than 35 penalties awarded in Munster's big win over Connacht last weekend, with Frank Murphy showing straight reds to Abraham Papali’i and Shane Delahunt for high tackles.

Lancaster says that referees, no more so than players, can make mistakes but that he expects performances to continue to improve in the Pro14.

"I think both players and referees need to learn as they go," he told RTÉ Sport's Michael Corcoran.

"If you took Super Rugby, the first round or two there was a very high penalty count which then seemed to settle down.

"Our game against Ulster at the weekend, I think it was 11-10 the penalty count, which made for a better spectacle.

"I think the key thing for referees is to get those big moments right. We can penalise everyone and everything in every moment sometimes in rugby.

"It's letting the game go, but getting the big stuff right.

"Keep the tackler away, showing clear release to make sure there's a fair contest for the ball. On the other side, making sure you're not coming in side entry and causing those injuries. That was part of the reason why they wanted to really put the emphasise on those breakdown decisions.

"I'm pretty confident that it will continue to move in the right direction."

Leinster head into the derby this weekend in exceptional form.

Any fears that the break caused by the coronavirus restrictions might upset their unbeaten season have been dispelled.

They had gone 21 games without tasting defeat when the action was postponed back in March, in a run that stretched back to their Champions Cup final defeat to Saracens in May of last year.

Since the return last month, they've accounted for Friday's opponents, as well as Ulster, to maintain their perfect campaign.

But Lancaster is quick to point out that they're only approaching the business end of the season.

Leavy on verge of 'remarkable' return for Leinster

"It's strange to get to knockout rugby in what almost feels like the start of the season," he admits.

"But we've known about this for a long time. The Pro14, to their credit, decided on the structure of this early. We knew about those two games - the inter-pros (derbies), they were great preparation.

"We've also know for a while that it could go semi-final, final, quarter-final, semi-final, but what happens beyond this weekend is irrelevant really.

"It's knockout rugby and both teams are desperate to win. I don't think anyone can bear the thought of not having a final to play next week so that's why it's such a seismic game." 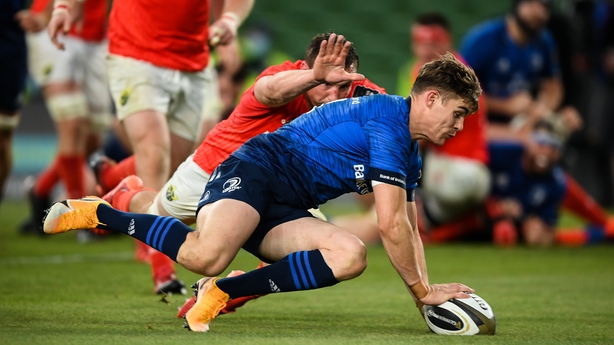 A Leinster-Munster match is arguably the biggest game in Irish rugby.

And while Lancaster concedes that it's a "shame" that supporters can't attend owing to the current health restrictions, he says that the match is still a massive occasion.

"When I was in England, the big rivalries were Leicester-Northampton, Bath-Bristol, Newcastle-Sale, even some of the Leeds games I was involved in - nothing really prepares you for the intensity of a Munster-Leinster game.

"I've been involved in quite a few now, some on the right end of the score, and some on the wrong.

"It's right up there with test rugby, there's no doubt. For the players and for the fans. That's the beauty of the Irish system.

"There's a genuine identity with each of the four provinces that fits nicely within the geography of the country.

"I think that's why Ireland have got a very good product, but also a very good national team as well, because that intensity and identity is genuine."

Follow the Pro14 semi-final between Edinburgh and Ulster (7.35pm Saturday) with our live blog on RTÉ Sport Online and the RTÉ News app or listen to live commentary on RTÉ Radio 1 Extra.