There were few positives to be gleaned from a day when Ireland's scrum was dominated, possession was turned over constantly and the usually reliable Sexton fluffed his lines in a 24-12 defeat.

A frustrating day for the full-back. England kicked intelligently, which didn't leave the Irish counter-attack much room to work with before the break. Picked up a knock early in second period. Replaced.

A half-time statistic claimed that Ireland, remarkably, spent just 31 seconds inside the England 22 during the opening 40 minutes. Conway and Co were not given much chance to shine in the attacking game, such was England's dominance. Replaced.

Did as much as anyone to try kickstart the Irish challenge after their deer-in-headlights start to the game. Could make little or no headway against a stunning English defence in the opening half. However, barged over for his sixth international try in the 50th minute, which dragged his side into the game.

Fantastic turnover on the half hour after Ireland had gifted England possession from their own lineout. An England try there may have left Ireland out of touch long before even the half-time whistle. At times hesitant when the ball came his way in open play, which stunted the sporadic Ireland attack.

Hesitated crucially, and disastrously, to allow Elliot Daly in for the killer second try - after Ireland had, to a degree, weathered the early storm. England enjoyed their biggest half-time lead over Ireland in nearly 20 years. The opening 40 minutes presented depressingly few chances for Stockdale to turn on the jets.

Unfortunate hot potato moment allowed George Ford to touch down for England's opening try in the eight minute after a typical barnstorming start to the game from the hosts. The handling error seemed to unsettle Ireland's captain and he struggled afterwards. Noticeably duck-hooked his opening kick at goal in the 14th-minute. His attempted conversion after Henshaw's try suffered a similar fate. A day to forget for the Irish skipper.

Kicked smartly, initially, to help drag Ireland into the game after England had dominated the opening 10 minutes. After that, however, struggled with the boot for the most part as England's relentless pressure left the Irish forward unit clinging on for dear life. One first-half box-kick was blocked down by the rampant Itoje. Replaced after a poor day for the scrum-half.

Forgettable day for the loosehead prop compounded by a first-half injury which saw him limp off to be replaced by Dave Kilcoyne after just 25 minutes.

Ambitious lineout throw approaching the half-hour mark gifted possession back to England - the last thing a tired Ireland defence needed after almost 30 minutes of relentless onslaught from the hosts. Blushes saved by excellent work from Van der Flier and Aki to eventually recover possession. Herring's darts, although they improved after the break - as did the entire Irish performance - were hit and miss for a lot of the day. Replaced.

Battled throughout as he always does. England comfortably had the better of the scrum however. Replaced.

Tough comeback game for Big Dev. Plugged away in the second row but the hard yards were harder gained than ever here. Frustration showed as he jawed with the match officials in the second half. Replaced.

Ireland's second row was largely cleaned out as the scrum issues which have been a feature of this Six Nations campaign continued. Fared better in the lineout in the second period after a quiet first half. Frustrations with the scrum's struggles boiled over at one point in the second half.

Helped steal an English lineout in the 20th minute with Ireland desperately trying to build a platform that would allow them gain a foothold in the game. Along with Kilcoyne, gave Ireland a physical platform to build on in the second half and played a crucial part in Henshaw's 50th-minute try.

Physical as ever with Stander in face of an English onslaught. Held up the (almost) unstoppable Itoje at one point in the 56th minute when the hosts looked odds-on for a third try. Replaced.

Stander's warrior spirit was there from the first whistle, as always, He even battled Maro Itoje shirtless at one point! Later dragged Owen Farrell around for a bit as the England skipper clung to his foot like a needy toddler.

Replaced the unfortunate Healy and was crucial in helping somewhat turn the tide in Ireland's favour in the third quarter of the game.

Came in to an Irish scrum that was being largely dominated by the hosts. Went over in injury time for a second Irish try after sustained pressure close to the England line.

Part of a triple substitution that came little more than a minute before England's third try that sealed the match. Scrambled toward the tryline deep in injury time as Ireland chased a consolation score, with Porter eventually going over.

Replaced a tiring Toner, his first Six Nations appearance in over a year.

Good to see the big man back after his concussion in the Scotland game. Showed promise and went close late on in the build-up to Porter's score.

Busy as always but, at 32, looking past his best.

Took over kicking-from-play duties on his arrival. One overcooked skip pass could have led to a fourth England try late on but Earls stepped in to rescue. 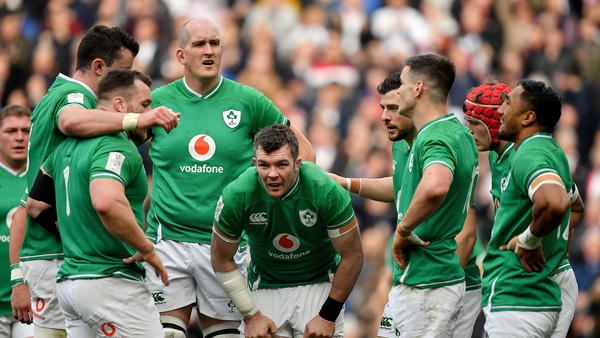