Courtney Lawes is targeting a fast start when England welcome Ireland to Twickenham on Sunday.

Eddie Jones' side scored after just two minutes in last season's clash and never looked back as Ireland's Grand Slam defence began with a devastating defeat that set the tone for a disastrous 2019.

Under new head coach Andy Farrell, Ireland have accumulated two wins from outings against Scotland and Wales, while the hosts lost out to France and beat Scotland, both matches away from home.

England have lost at home just seven times in the Guinness Six Nations since 2000. It remains a fortress but Lawes knows that the home crowd can turn hostile if things don't go as planned.

"We're expecting a pretty physical battle," said the forward, who starts on the flank for his 84th cap.

"Up front they have got a really good pack, a big pack, so that is a big area for us to front up and show we want it.

"We want to get out there and get at them. I'm really looking forward to it.

"Playing at Twickenham can be a big advantage, but it can also turn against you if you don't get it quite right. It is what you make of it."

Lawes replaces Lewis Ludlam in the England pack but was sporting a nasty looking black eye at today's media conference.

"Nothing too crazy. It's all fine, just a clash, my head on something, not sure what.

"I'm hoping it will go down a bit by tomorrow. It's all right - I got through today so I was all right."

Lawes was also asked about the unique father-son subtext to tomorrow's round-three clash with Andy Farrell's son, Owen, captaining England from inside centre.

"Owen has not spoken about coming up against Andy too much. Owen is just a competitive person," Lawes said.

"No matter what game it is, he'll do everything to win and it's infectious and good for the team.

"We obviously really enjoy him being our captain - he leads by example and he leads with his words. No matter who we play he wants to win." 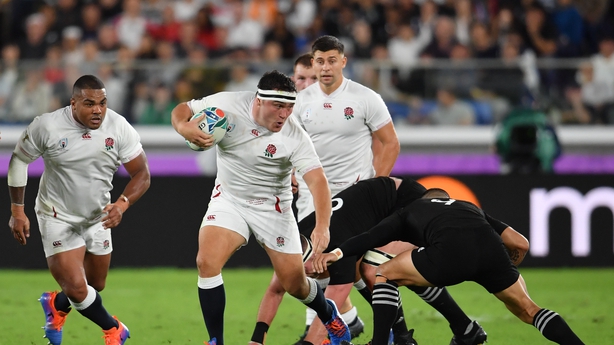 Jamie George added that England must be ready to fight for every inch against Ireland's "scrappers".

One of Ireland's strengths is the ferocious commitment of their forwards, who are wily operators on the floor, and George knows what is coming against Grand Slam-chasing opponents.

"It's attritional and that's what you expect from Ireland," Saracens and Lions hooker George said.

"If you look at any Irish club team, they make you fight for absolutely everything and it's the same with the national team. They are, to a man, scrappers.

"They make you fight for everything and we're fully prepared for that. Physicality is something we've been speaking about this week.

"When we've played well against these guys we've fronted up physically. That's got to be at the forefront of our minds.

"We know we need to beat them if we're going to win the title. We didn't get off to the best start but we laid some foundations against Scotland and we've built on those over the last couple of weeks.

"We're expecting to produce a different level to what you've seen from us already in this Six Nations."

"If Ed Sheeran is listening then he's always welcome into camp!"

George knows from experience that Farrell will have Ireland's defence well prepared.

"Andy will make sure their identity always remains the same, but he will add his touch of class. He's already taken their defence to a different level," he said.

"Having worked with him a couple of times, he's got a great knowledge of defence, around attack and in the kicking game. He's also got a lot of clever ideas.

"He adds that touch of class to them. He's a strong leader who speaks incredibly well and he'll have them jumping out of that changing room and ready to go.

"That's added a huge string to their bow and we've seen that in the first two rounds. We're expecting a very physical Ireland team."

U2 singer Bono made a motivational visit to the Irish camp at the start of the week and England have since decided which pop star they would like to see.

"We actually spoke about this. If Ed Sheeran is listening then he's always welcome into camp! We'd make him a coffee and make him feel at home," George said.