Paul O'Connell brought the aura of a true leader, Bono brought the presence of a star, and now - after a feelgood week in camp - it's up to Ireland to bring a performance to Twickenham.

There's a Triple Crown at stake on Sunday, not to mention the chance to wipe out the painful memories of last year's Dublin defeat to Eddie Jones's men and subsequent summer mauling in the run-up to the World Cup.

Ireland are in a good place at the moment after a dreadful 2019. New coach Andy Farrell has hit the ground running, notching Six Nations wins against Scotland and Wales.

A major test lies ahead across the water but captain Jonathan Sexton will take his team there in a quietly confident mood.

"We're happy with the trajectory we're on," he told RTÉ Sport's Michael Corcoran.

"We built on week one (against Scotland) with a better performance in week two, and now we need to get better again for week three. A bonus-point win against Wales, we'd have taken that every day of the week. They are a top quality team." 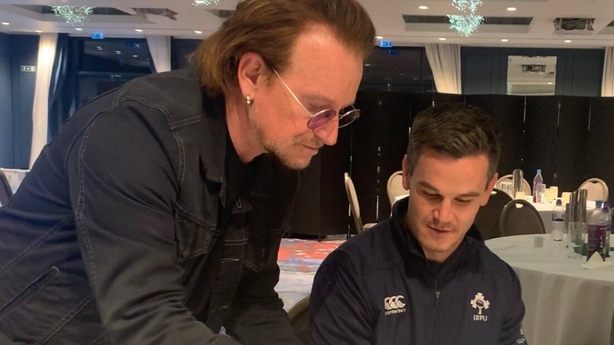 O'Connell and Bono spent time with the squad earlier in the week as Farrell and Sexton freshened things up out in Carton House.

Two towering figures in their own way, but Sexton was thrilled with the impact both men had on the group.

"We want to learn as much as we can from people of that ilk. We invited him in this week to spend some time with us, to see where we can improve, and to pick his brain as well.

"We'd only be inviting the best of the best - and we had to of the best, Bono and Paul O'Connell! You'd put them in the same category really.

"We've had people in before like Christy Moore, and they've performed gigs, but what surprised me about Bono - and maybe it shouldn't have surprised me - was how much I took out of when he was speaking about his performances, how he has to be at his best every time, how he never felt he's got to where he wants to get to and he's still searching for that perfect performance. It rung a bell with a lot of us."

England, of course, will be ready and waiting to spoil the party. The World Cup finalists have yet to click into top gear but Sexton was quick to point out the influence of the elements in their two previous games.

"The conditions they've played in have been very poor. Against France, it was a very greasy ball. Then they went to Murrayfield and the conditions looked almost unplayable just looking at the footage never mind what it would have felt like out on the pitch.

"So I'm sure they're looking forward to getting back to Twickenham now in better conditions. It's a massive game. 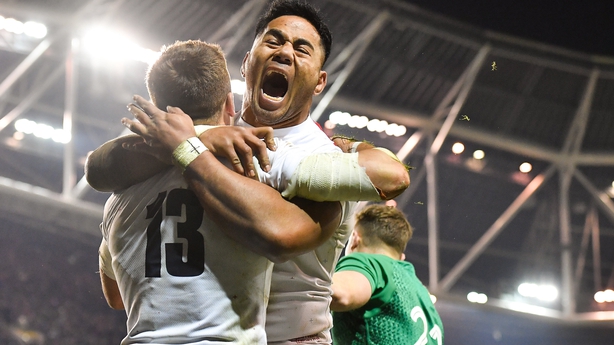 "They've a lot pf pace, a lot of ball players, and obviously Manu Tuliagi coming back, he's a huge player for them in terms of ball-carrying. He's top quality. They have got a bit of everything through their team. We're up against it, but we've been underdogs before and we've put in big performances."

As for the captaincy, Sexton said he's enjoying the extra responsibility.

"When I first got it I felt incredibly honoured, and then I went about trying to make sure that I did a good job.

"Ultimately you get judged by performances. Evert decision I make on the pitch will get scrutinised and it's the players around me that will make the decisions right or wrong.

"I saw some criticism of decisions I've made already and they've ended up being right decisions, so I can only imagine what's going to happen when some of the decisions I make don't come off. That's just the nature of the job."