Ireland somehow escaped to an barely deserved 19-12 Guinness Six Nations victory over Scotland at the Aviva Stadium to get Andy Farrell's reign as head coach off to a winning start.

It was a huff and puff effort that had more in common with the vintage of 2019 than the grand slam-winning effort of 2018.

Scotland captain Stuart Hogg dropped the ball when over the line during the second half and the hosts just about survived a frantic final 10 minutes when Gregor Townsend's side should have scored at least once to salvage a draw.

They had not left Dublin with a win since 2010 but belied their 14-point underdog status to give Farrell's new side the fright of their lives on a beautifully still evening in Dublin.

In the end it was the class of new skipper Johnny Sexton that got Ireland over the line, the out-half scoring a try and kicking four penalties and a conversion to secure the four points.

A new era it may be but many of the old problems surfaced.

All the early pressure came from the visitors, with Ireland's defence holding firm for five minutes before slow play at a ruck allowed Adam Hastings to slot over a penalty.

That came immediately after debutant Caelan Doris, injured in a ruck, departed the fray. The highly rated Leinster number 8 will have to wait another day to announce himself on the international stage.

Ireland were somewhat static in attack but a Jordan Larmour break set up field position for the first try of the Farrell era.

A series of phases close to the line forced the Scots to concede a penalty and, playing advantage, Murray and Sexton beautifully combined to find a gap, which the Leinster man sprinted through to dot down before adding the conversion.

Iain Henderson and Peter O'Mahony, who replaced Doris, made important contributions in defence as Ireland repelled a close-range attack from the Dark Blues, who had added another Hastings penalty in the 16th minute.

Sexton added a penalty in the 35th minute after Ali Price went offside at a ruck but was just off target a few minutes later after good work by Six Nations debutant Rob Herring earned another shot.

Neither side was able to grab a hold of proceedings and the next five minutes was frantic.

Bundee Aki, one of five changes made by Farrell to the team beaten by New Zealand at the World Cup in October, burst free but Murray's looped pass was well read by Sam Johnson, who linked with Hastings and Sean Maitland and Scotland looked destined to score.

But CJ Stander, man of the match, was alert and won a penalty at the breakdown, much to the delight of Farrell in the coaches' box.

However, that relief was short-lived when Sexton missed touch and Scotland countered, eventually the ball came back to the out-half, who gladly cleared to touch to preserve a just-about deserved 10-6 half-time lead.

That was extended to seven points when Sexton landed another penalty after good pressure on the Scots' line for the opening five minutes. Robbie Henshaw, on for Garry Ringrose at the break, getting involved straight away.

But Ireland were still not sharp on the ball, and Hogg began to grow into the game, starting a number of Scottish counters. Only a smart read from Larmour saved a try when Ireland found themselves badly outnumbered on the right flank.

Townsend's side, who won just one game in last year's championship, sensed the fluster in the Irish ranks and piled on.

Somehow an unmarked Hogg dropped the ball out of his hand as he went to touch down in the corner, the captain cursing himself even before the giant screen replay magnified his error for the sell-out crowd.

But a possible seven became three as Hastings, in for the Finn Russell, who was not considered due to a breach of team discipline, slashed the lead to four with his third penalty. 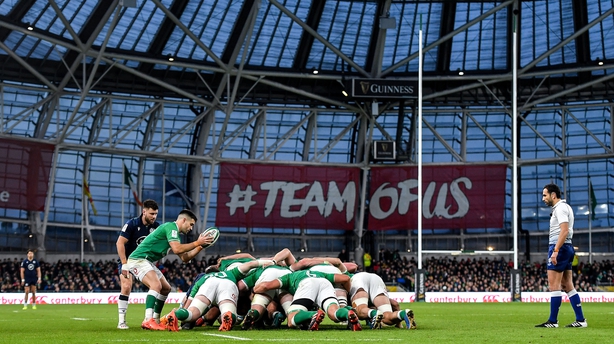 Ireland lost prop Dave Kilcoyne, who had just replaced Cian Healy, to disrupt matters further but worked their way downfield, Furling to the fore, setting up Sexton to tap over his third three-pointer as the Scots conceded their 11th of a total of 14 penalties.

That was cancelled out in the 66th minute when Hasting again punished slow Irish play at the breakdown to ensure a nervy end to the game.

The hosts worked their way up the field but once more a handling error ended the move and gave the Scots, who lost their World Cup meeting 27-3 just four months ago, hope.

But they were to be the authors of their own downfall as Johnson changed his line to push Andrew Conway out of the way as he chased a Sexton Garryowen.

The captain struck over the kick and Ireland had to see out the last eight minutes with Ross Byrne and John Cooney on the field for Sexton and Murray.

It was somewhat fitting for Farrell, who had spent the previous three years as defence coach, that the victory was finally earned with a turnover on the line when Scotland looked bound to score after multiple close-range darts.

Wales, who beat Italy 42-0, won't be so profligate next week.