Ulster coach Dan McFarland name-checked Stuart McCloskey as one of his main men in their emphatic Guinness Pro14 win over Munster in Belfast.

The 27-year-old first centre scored the hosts' fourth try and took home the man of the match award.

McCloskey, who was part of an extended Ireland training squad last month, also caught the eye with 13 carries and eight passes.

McFarland told RTÉ Sport: "We’ve done a lot of work on [ball-carrying] and some of the guys were carrying well.

"A couple of the tries that we got from the set-pieces and a couple of phases followed on from really good carries.

"We had to work tries through tactical appreciation and I think [backs coach] Dwayne Peel did an excellent job constructing the systems that unpicked the lock."

Ulster’s next assignement is a trip to Clermont for the Heineken Champions Cup. They currently sit one point clear of the Top 14 side in Pool 3.

"Sometimes [playing against Clermont] it’s like there are four balls on the pitch and you’ve got none of them," he added.

"Our attitude will be to go there to win. We have to have that attitude, and as good as they are and as big a challenge as it is we’ll relish that, in fact, we want it." 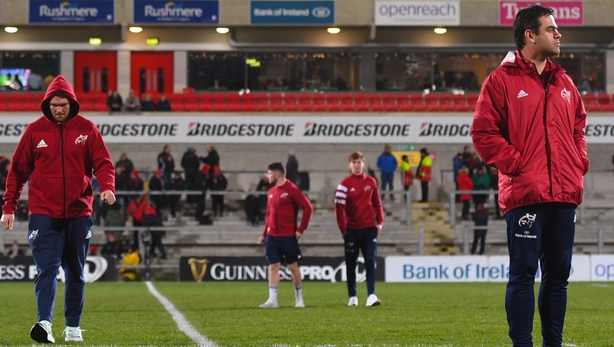 Munster boss Johann van Graan didn’t hold back in his assessment of their fourth defeat from 10 Pro14 games and their second derby loss in a row following a 13-6 reversal against Leinster.

"Our continuity wasn’t there and from my point of view that’s not good enough in terms of performance," he said.

"We’ve got nine days turnaround [until a must-win Champions Cup game away to Racing 92].

"Yeah, it is [the biggest week of the season].

"Unfortunately there’s not a lot of momentum going in there but that’s the beauty of sport, you’ve got to take it on the chin and move on."