John Cooney was again the star as Ulster continued their good form with a resounding five-try hammering of Irish rivals Munster at Kingspan Stadium.

The scrum-half scored 18 points - a try, all five conversions and a penalty - as Dan McFarland's side ran up another bonus-point victory.

Munster managed tries from Shane Daly and Niall Scannell along with two conversions and a penalty from the boot of Joey Carbery.

Ulster led 17-10 at half-time after coming from 7-0 down through tries from Cooney and Baloucoune which were converted by Cooney, who also kicked a penalty.

They went on to cross the Munster line three more times in the second half.

Munster opened the scoring in the ninth minute when full-back Daly surged through a gap in Ulster's short-side defence to touch down.

Cooney cut the lead to 7-3 in the 14th minute after Keynan Knox gave away the penalty.

The home side then added a try in the 17th minute from Cooney after Stockdale's break down the left and the scrum-half converted his own score to put Ulster 10-7 ahead.

Ulster could have had another score six minutes later only for Will Addison to lose control of the ball, with Stockdale wanting to attack the corner. 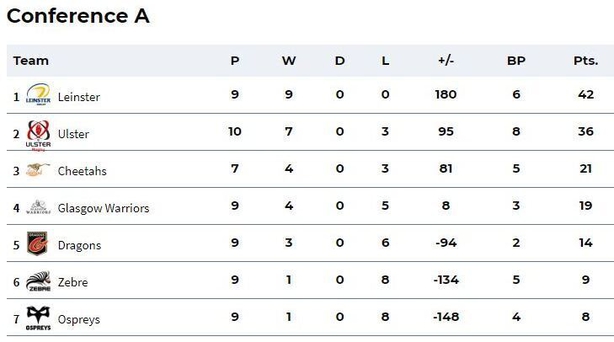 Ulster put the squeeze on by staying in Munster's 22 for nine minutes which saw Munster concede a number of penalties and the home side opt for lineouts and scrums.

The net result was a try from off Luke Marshall's assist. Cooney again added the two points to stretch Ulster's lead to 17-7.

Then with the last play of the half, McCloskey was pinged for not rolling away and Carbery did the needful, cutting Ulster's lead to seven points.

Ulster were out of the traps first with the second half only two minutes old. Rea surged through a gap rather easily to score and Cooney's conversion took their lead to 22-10. 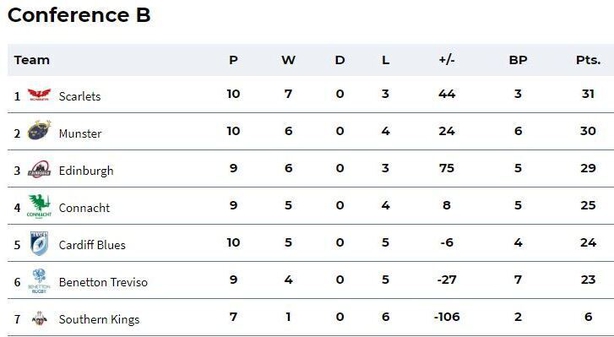 The bonus point was inevitable and arrived in the 57th minute. After Dan Goggin was enveloped by Nick Timoney and Stockdale, Ulster won the penalty and put the ball in the corner.

With pods of forwards hammering at the Munster line and another penalty pending, McCloskey barged over near the sticks. Cooney once again converted.

Stockdale then ran in an intercept just after the hour when he read Carbery's pass to Sam Arnold.

Niall Scannell got over from a 64th-minute maul, which Carbery converted off the post, but that was as good as it got, with Chris Cloete being sin-binned with seven minutes left for a tip tackle on McCloskey.

Ulster also ended the game with 14 men when Kyle McCall was shown yellow in the 78th minute.

Munster drop to second in Conference B after the Scarlets won 16-14 away to Cardiff Blues.