There is of course never a good a good way to lose, but the manner of Ireland's defeat to Wales in the November Women’s international at UCD was a bitter pill to swallow for Adam Griggs’ side.

With the clock in the red, Ireland held a 13-10 lead at UCD Bowl and had the put-in to a scrum to see out the game.

Wales however engineered a scrum penalty and kicked to the corner, with replacement scrum-half Keira Bevan scampering over from close range in the fourth minute of added time to claim a 15-13 win.

Griggs said afterwards the players were "devastated" in the changing room post-match, and captain Ciara Griffin echoed those sentiments. 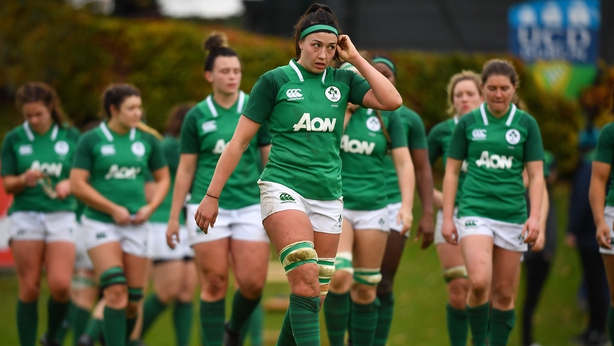 The Munster backrower was immense, pilfering a number of steals against their Six Nations rivals, but admits their game management must improve if the team is to progress.

"There is no way of glossing over it, we set standards for ourselves and we didn't meet that standard," she told RTÉ Sport.

"Test match rugby is about executing, holding up possession, running out the clock. Unfortunately we didn't do that, but that’s a big learning curve for us, but it’s a tough one to take."

Results over the last 18 months have been patchy, but Griffin can see green shoots, from the summer camps to the recent training camps in Scotland and France.

"We have a mountain of work behind us. We have put in new systems in attack and defence. They will take time to learn.

"I can see a marked improvement in our defence from last season."