Jordi Murphy is hopeful of playing some part in the rest of Ireland's Rugby World Cup adventure despite lasting just 26 minutes of his first game in Japan.

The Ulster back-row was left out of Joe Schmidt's initial squad but was flown out as a replacement for the injured Jack Conan Sunday before last.

Murphy went straight into the starting XV for the 35-0 win over Russia last Thursday but dislocated a rib early on in that match, leading to fears his tournament might be finished as soon as it had started.

"I didn't think it was over, I was just incredibly disappointed," he told RTÉ Sport today.

"First of all not making it, then getting called out and picking up something like that...

"It has been a bit of a rollercoaster.

"I was preparing to play the Ospreys eight days ago and then I got a call from (Ulster head coach) Dan McFarland, saying that I was going to be pulled as a precaution and the decision would be made after the Japan game.

"The following day Joe called me, after the game. A couple of hours later I was flying over here.

"The great thing about it was that I was told pretty much straight away that I was going to be involved in the game against Russia so I had no time to really think about it, just try to hit the ground running.

"I was delighted to be able play last week. Obviously it was a bit short-lived but the damage isn't too bad so I'm hopeful I'll get another opportunity at some stage in this tournament to help out the boys." 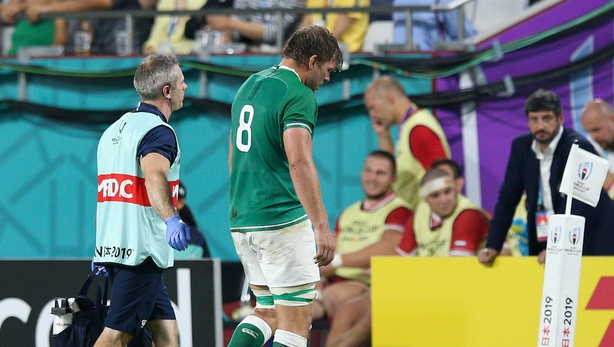 Murphy was unable to train fully today but expects to be back in action on Thursday and available for selection against Samoa on Saturday.

"I didn't really know what the final diagnosis was going to be but it's been positive so far.

"The ribs is never a nice part to hurt. I've popped cartilage in a few ribs before but this was just a bit of a step up from that.

"I got caught in between two people, the pressure just gave way and so did the rib. It popped back in after a few minutes and I thought 'Oh happy days' but then it went again.

"It was more frustrating because I kind of wanted to continue but I realised after a few minutes that I wasn't contributing as much as I would have liked to.

"I gave it as much as I could but ultimately had to call it a day.

"But I'm feeling a lot better. I've got a lot of good medical attention the last few days and have just been trying to work my way into the week.

"Fingers crossed I'll be in contention for the weekend. No contact (training) as of yet but maybe on Thursday."

Ireland take on Samoa on Saturday knowing that a bonus-point win would guarantee a place in the quarter-finals while even a win without a bonus point is likely to be enough due to their superior points difference.

"It's very much in our hands," said Murphy. " If we go out there and get a win, hopefully five points and guarantee qualification.

"We've had a couple of days off and we're getting a full week into this game. We really want to do ourselves justice and get into the knockout stages."