New Zealand are relishing the pressure as they vie for an unprecedented third consecutive World Cup title and have put behind them a recent lacklustre spell to kick off their Japan campaign with a clean slate, says captain Kieran Read.

The All Blacks lost their world number one ranking for the first time in nearly a decade last month - they briefly regained it only to fall to second after Ireland - prompting speculation their recent domination of the tournament could be at its end.

But for the most-capped All Black of the 2019 World Cup squad, none of that matters.

"The results are not important at all. I think that's shown across all the test matches that have been played," Read told reporters after the team arrived in Tokyo for a welcome ceremony. "Teams have beaten each other across the board.

"So in the World Cup it (form in the warm-ups) doesn't matter, it's about turning up in this World Cup and putting your best foot forward. And so every team right now has got the same chance as everyone else."

New Zealand are coming off a July and August that saw them draw with South Africa in Wellington, narrowly avoid an upset to Argentina and get blown away by Australia.

But they regained their footing with a dominant win over the Wallabies and a 14-try demolition of Tonga last week set them up nicely for the tournament.

Read, a member of the 2011 and 2015 World Cup-winning squads, said there was pressure in their quest for a third straight title but added that the team embraced the challenge.

"We wouldn't be sitting here as a part of this tournament if we didn't relish these opportunities to play at that highest level. And the World Cup is the highest level," he said.

"It's what you want to do when you pick up this game and play for your country so we walk towards that expectation and we really relish it, so that's what we're hoping to do this tournament."

Head coach Steve Hansen said the All Blacks' World Cup track record helped give his team belief they could triumph but that nothing was taken for granted, particularly in a World Cup where the gap between teams had narrowed compared with past tournaments.

"It doesn't make it any easier. It does give you confidence that you can do it," Hansen said.

"At the same time you have to come out and earn the right to win it. It's not going to be handed to you just because you won the last two," he said.

"If you don't turn up with the right intent and the right attitude you're going to get a butt-kicking. There's teams that are very, very capable. More probably this year than previous World Cups."

New Zealand open their campaign in a blockbuster clash with South Africa on 21 September in Yokohama. They also play Canada, Italy and Namibia in Pool B. 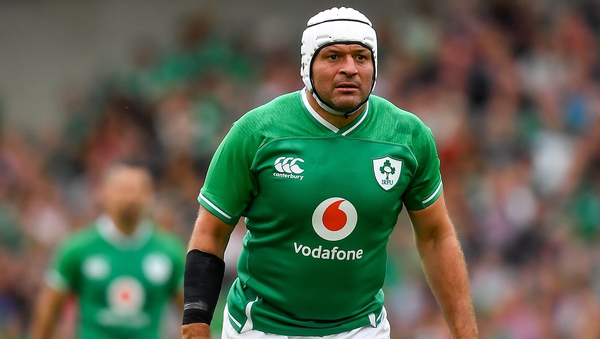 Rory Best: Sometimes you need a kick in the teeth