Rory Best hopes the "kick in the teeth" of record defeat to England can jump start Ireland's World Cup drive.

Ireland are settling into their Japanese surroundings ahead of their Pool A opener, the pivotal group-stage clash against Scotland in Yokohama on Sunday, 22 September.

Joe Schmidt's men were thumped 57-15 by England at Twickenham three weeks ago- but have shrugged off that record loss by beating Wales twice to climb to the top of the world rankings.

Test captain Best has conceded Ireland let this year's Six Nations pass them by, as their Grand Slam defence ended in a mediocre third-place finish.

Ireland looked far sharper and more aggressive in the 19-10 win over Wales in Dublin that closed their warm-up campaign, with key men Conor Murray and Johnny Sexton back in the groove - but Best has still demanded wide-ranging and rapid improvement.

"Sometimes you need a moment where you have to reflect, and we probably let the Six Nations drift by, subconsciously, I think," Best said.

"We'd talked about needing to do this and to do that, but sometimes you need a proper kick in the teeth to say 'whatever we think will happen won't just do so because we presume we're a good team, we need to just get back to and really re-establish our principles'.

"And it's about actually living them, not just talking about them.

"We made some progress in the games against Wales, but we're under no illusions we've still got a lot of work to do.

"We can start focusing in on Scotland now and that's really exciting for everyone." 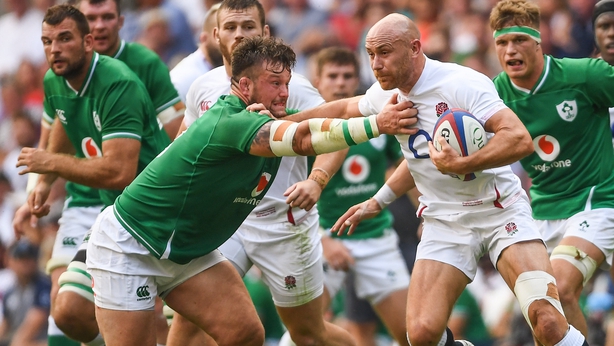 Ireland's eight-try humbling at the hands of a rampant England sparked widespread concern on the chances of boss Joe Schmidt's side registering their best-ever World Cup return in Japan.

Best's squad are the latest Irishmen bidding to move past the quarter-finals for the first time, and that 2018 Six Nations Grand Slam and the nation's maiden two wins over New Zealand have sent expectations soaring.

Evergreen 37-year-old hooker Best was calm enough to shrug off criticism of his captaincy after a poor showing at Twickenham.

And now the Ulster stalwart has accepted Ireland were always going to come under fire after that Twickenham hiding.

"Because we didn't perform anywhere near well enough against England you could argue that we brought it on ourselves," said Best.

"If you set a high bar and then don't reach it that draws a bit of heat and attention onto you.

"As a squad we had said 'we'll get it right at the World Cup'.

"When you say that and then you're patchy enough against Italy - good at times but patchy overall - and then go and play like that against England, you're going to draw attention.

"You're never as good as people say you are, but the good thing is, you're never as bad either. You'll always sit somewhere in the middle.