As late as Thursday afternoon Joe Schmidt wasn't exactly sure when his 31-man World Cup selection would be officially released.

But the realisation that it would be nigh impossible – as had been suggested – to withhold the information for a full week after informing the players seemed to push the IRFU into action sooner than they wanted.

With that, the head coach went on the record this afternoon with his squad list and while it had one headline omission, that of Devin Toner, a number of other men can consider themselves unlucky.

When Sean O’Brien and Dan Leavy were ruled out through injury, Jordi Murphy must have felt that his couple of dozen caps, including a starring role in 2018 for both club and country, would count, however, he was outshone by Rhys Ruddock in the Italy match.

Ruddock, who has captained Ireland, is seen as a valuable asset, with his bulk and durability going in his favour.

Schmidt spoke in glowing terms about Will Addison after Saturday’s game against Wales but ultimately the Ulster back ran out of time with injury curtailing his involvement prior to that.

Rob Kearney, who was dropped for the opening Six Nations game, may have been worried that he would become the victim of a bolter.

After deciding to take 14 backs there was unlikely to be room for three out-halves and three scrum-halves and with the need to protect Johnny Sexton paramount, it was always going to mean just two number nines travelling.

The inclusion of Joey Carbery gives Schmidt an option should Conor Murray and Luke McGrath get injured and, similar to four years ago, when Ian Madigan was pencilled in to deputise should the need arise, there is no specialist third man to cover.

"Kieran Marmion is a guy you would hold up [as a quintessential squad member]," said Schmidt.

"He has done some fantastic stuff… it was a very tough decision."

But without question the Toner issue is one that carries the most risk for Schmidt.

The post-mortem after the savage beating at the hands of England had revealed multiple injuries to the corpse – bad attitude, fatigue, first run-out for many – but the killer blow was the lineout malfunction.

It, more than any other aspect, was singled out for mention by any and all members of the squad or management that were on media duty in the days after the game. 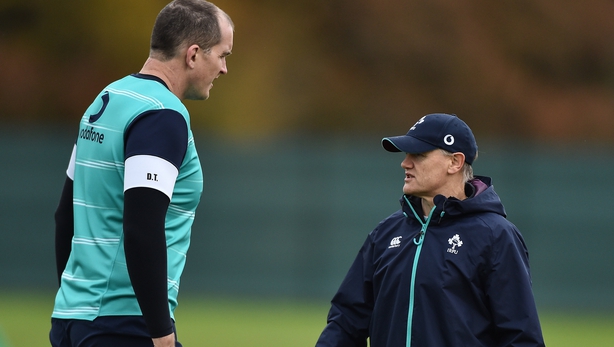 That’s why 33-year-old Toner’s exclusion came as such a shock, and that he lost his place to a lock unproven at international level, and who was practically anonymous in Twickenham, only served to raise eyebrows further.

Despite featuring in 50 of the 67 games Schmidt has been in charge for, Toner has this year faced a battle for a starting jersey in the face of injury and the emergence of James Ryan, with the versatile Iain Henderson preferred as a more dynamic option.

But Ireland’s dismal lineout performance against England, where Toner started on the bench, seemed to emphasise the importance of the Leinster man to the gameplan, where so much comes off a solid lineout platform.

Starting on Saturday against Wales – when both sides will field much stronger XVs than in Cardiff – this department needs to perform like it did in 2018. While Toner did miss most of the 2019 Six Nations campaign through injury, it was believed that fitness did not come into the decision.

"We probably don’t have a specialist tight-head second row," was Schmidt’s reasoning for why Kleyn got the nod.

"At the start, I talked about the balance that we’re looking for across that squad of 31. Jean Kleyn fitted that."

All going well the South African won’t be required to start in the opening game against Scotland but if a lock goes down between now and then, it means an out-of-sorts hooker, Rory Best, has to form an understanding with a callow international second row in the intense pressure of a probable pool-topping clash. Talk about pressure.

Should Scotland target this area and get the better of Ireland then Schmidt’s call to leave Toner at home will come under even more scrutiny.

Soon after the squad was announced, former Ireland player Luke Fitzgerald aired his disappointment that a project player, who only became Ireland-qualified ahead of the warm-up against Italy three weeks’ ago, had usurped his former team-mate.

"I made the same point regarding [Ultan] Dillane a few weeks ago. We’re eating away at our own foundations by not picking people who’ve come through our age grade system-to all the short sighted folk out there."

Schmidt, whose sole focus is to get Ireland to a first-ever semi-final, could hardly take that into account.

The Toner call is a risk but despite the talk from the Ireland camp about going back to what brought success in 2018, there had to be some outside-of-the-box thinking.

Schmidt has a plan for Kleyn and only time will tell if it comes together.