Richie Gray made the decision to opt out of World Cup selection with Scotland, according to assistant coach Danny Wilson.

The 29-year-old Toulouse lock was a surprise omission when Gregor Townsend named his 44-man training squad in May while eyebrows were raised again on Tuesday as Glasgow second-rower Tim Swinson was drafted in ahead of Gray to provide training cover after Sam Skinner was ruled out of next month's tournament.

Gray has not featured for the Scots since a clash with Italy in Rome 18 months ago, with back and hip injuries ruling him out for much of that period.

However, the former Lion did recover from surgery on his most recent injury to help his club side lift the Top 14 title and there have been calls for him to be handed a recall on the back of two ropey line-out displays from the Scottish pack against France this month.

But Wilson confirmed the decision not to travel to Japan was not made by Townsend but instead by Gray - who has had to juggle the birth of his son Ostin with his fitness battles in recent months.

Ireland face Scotland in the opening World Cup game in Yokohama on 22 September.

The forwards coach said: "Gregor has been in constant conversation with Richie. But due to family reasons and perhaps returning from injury and fitness he has decided that he could not commit to the World Cup.
"It was Richie's decision.

"From my end I really admire the player. I think he's been a great player for Scotland over the years as he is a quality rugby player.

"Timing does come into these things at times and obviously that's a personal choice which we understand from Richie.

"I've never actually worked with him, he's not been in the squad since I began my time with Scotland. Hopefully that will happen in the future, but we'll see." 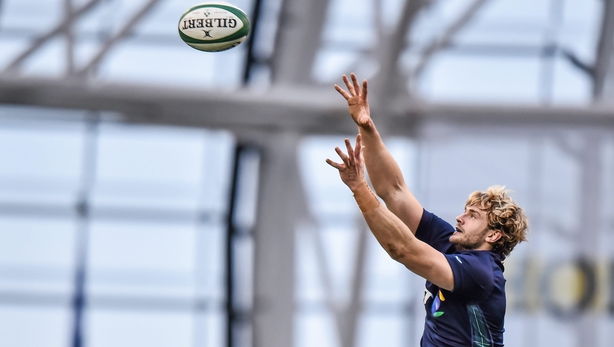 Swinson has now been given the chance to stake a claim for a seat on the plane to Japan although he does not have long, with Townsend set to unveil his 31-man travelling party at a special ceremony at Linlithgow Palace next Tuesday.

The Scottish Rugby Union announced Swinson - also a late addition to Vern Cotter's squad who competed at the World Cup in England four years ago - had been added to "the wider training squad" after Skinner suffered a hamstring injury during Saturday's 17-14 victory over the French.

And Wilson hinted the versatile Warriors lock, who can also operate in the back row, might squeeze in again if he can make his mark over the next few days.

Speaking ahead of Saturday's clash with Georgia in Tbilisi, he said: "Swinno has been part of the squad recently. He picked up an injury at the end of the season but prior to that he was playing really well for Glasgow.

"So he comes back in to train with us, that's all it is at this stage.

"We've obviously got a decision to make around that second-row/back-row situation that Sam offered us some flexibility around.

"There's definitely an opportunity for boys to perform in these games then get picked but first of all (Tim) would have to get picked to play and right now he's just in to train.

"We'll see how that goes over the next two days."

Skinner has been ruled out for the next four weeks at least but Wilson urged the Exeter man to get himself fit as quick as possible just in case he is required to make a late dash to Japan once the competition gets started.

He said: "Hopefully Sam will return as quickly as possible and in five or six weeks, depending on injuries (to other players), we'll have a fit body to look at.

"But that's not for me to decide the time frame, that will come from the physios."