Ireland meet up again on Wednesday ahead of departure for an eight-day training camp in Portugal.

After cutting his 45-man panel by two last week, Joe Schmidt hinted that the plan was to reduce it further ahead of the trip, something that now may not happen.

"We are going to meet [Sunday] morning after having had a look at the game this evening and then we'll make a decision," he told RTE Sport after the 29-10 win over Italy.

"So if there are a couple that don’t travel. I think we’ll probably travel with about 40 but it could be 43.

"As you branch off with a smaller squad, just keeping those guys up to speed with what we're trying to develop, it becomes a little bit of a difficulty for us, especially if we pick up an injury.

"We're playing England, Wales and Wales [again], physically big teams, physically bigger than we are, therefore there tends to be a risk of attrition.

"So I don't want those other players to get too far away from us, because we want them up to speed if they do miss out on that 31 in the end."

Of yesterday's panel of 23, Garry Ringrose, Devin Toner, Cian Healy, Jordan Larmour, Iain Henderson and Joey Carbery (injury permitting) are certainties to make the squad for the World Cup, which begins for Ireland on 22 September against Scotland.

But the rest of the bunch are in a fight for their World Cup places and the game against a poor Italian provided the first, perhaps only, chance for the fringe element to give Schmidt a decision to make. 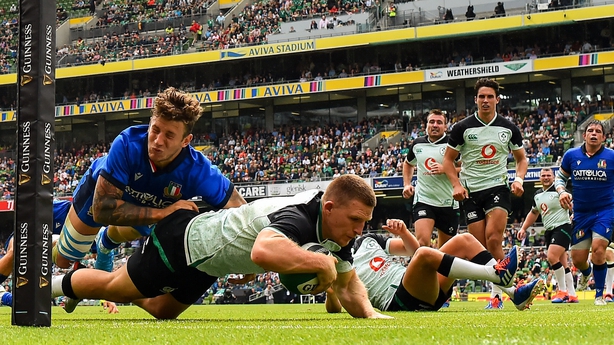 The Munster wing scored a try and was named man of the match. He took two high balls and came off his wing to look for work. That performance is likely to have done enough to earn him at least another start in one of the remaining games. Schmidt would only go so far as to say "he did really well" but that's his sort of language, a message that he still wants more.

The captain did his case no harm whatsoever, making 14 runs with the ball in hand. For someone operating in his position the likelihood is that his resilience will stand to him ahead of the final squad selection.

The Leinster man was included in Schmidt's appraisal of the back row but he was the busiest of the three and can be content with his day's work.

Sent a timely reminder about what he offers to the team with two typical turnovers soon after his arrival on 61 minutes. The Munster lock / flanker still has work to do to book his place on the trip but will definitely get more game time in the remaining games. 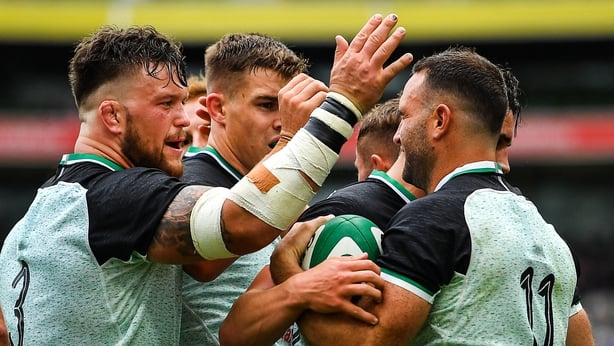 Played 60 minutes including 20 in his old position of loosehead as Ireland won seven of seven scrums. "The neck is a bit stiffer than it usually would be," he smiled afterwards. "It pushes my case forward." It certainly does. The Dubliner was name-checked by Schmidt when asked about Jack McGrath's substitution at half-time: "The reality is in the World Cup, you're going to have to have one prop who can play either side," he said.

Off to a good start was Schmidt's verdict on the South African. The manner of his inclusion in the squad suggests that the boss wants to be able to call on his bulk during the World Cup when the need arises. He notched up 16 tackles, second only to Tommy O'Donnell, and was prominent in the lineout. It would be strange if he were to be cut ahead of the England game. Schmidt: "His work-rate was excellent, a couple of really good impact tackles, that certainly stopped the Italian momentum when he got involved." 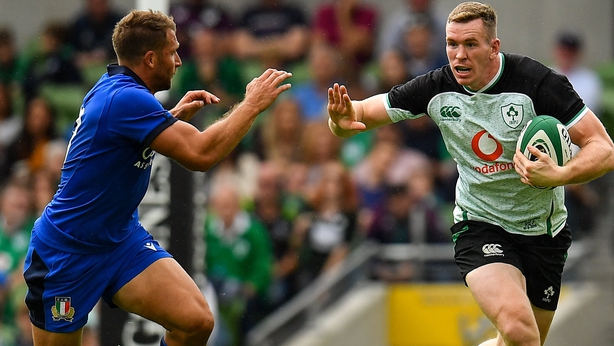 It's a competitive position but the Ulster man will be happy. When the boss was asked about Farrell's ability to play at 12, he said: "He took a step towards it. It's something that we know all three of the other centres can do," hinting again that versatility for World Cup players is vital.

The prop made two impressive carries and was also mentioned by Schmidt post-game as someone who can adapt. "John Ryan has played either side in the past," he said. Will be happy with his contribution.

There is a case that the Leinster back was the victim of a harsh call when he had a chance for an early try but Ireland have wingers who would have scored from that position. He did well after that and finished smartly for his score but the 30-year-old is in a bracket where he must stand out at this stage. Larmour and Conway were better.

With Kieran Marmion and John Cooney also in contention as back-up to Conor Murray, McGrath had an unspectacular outing. He came up short with a little snipe towards the end of the first half and he may not have even tried that in a championship game.

Lasted just 20 minutes after suffering a "back spasm" and is among the group of players who needed to step up. Niall Scannell is probably ahead of him in the pecking order as it stands, while the situation around Sean Cronin remains an intrigue.

Got on the score sheet with Ireland's fourth try but a slight surprise that he ran just 12 yards with ball in hand, the fewest of the back row players. Won't have fallen down the list with this performance given the absence of Sean O'Brien and Dan Leavy.

The 2017 Lion was withdrawn after 40 minutes and Schmidt was kind in the post-match press conference. "We were really happy with Jack's first half, to be honest. Again, he got up off the line and made some good impact tackles. And Jack for us, is very good around our attacking breakdown as well." The Ulster player could have done with a bit more action.

The Munster flanker made his first Ireland appearance in over three and a half years, but again, was second to Ruddock in the Irish back row. Schmidt said: "He did get onto the ball very quickly and it was good to see him looking for the ball post-tackle. He's a dynamic player, he's got good acceleration and good ability to change up when he's carrying the ball."

May just become a victim of the mathematics as Schmidt decides how many scrum-halves to bring. Carbery's injury, if it is serious, would push John Cooney up the list with his ability to play at out-half.

The Connacht out-half got 30 minutes after Carbery's injury and didn't do much to promote his cause. Will stay with the panel given the out-half situation.

Got more game time than expected due to Herring's injury and was unlucky not to finish off a fine Ringrose break in the second half. He's coming into favour with the head coach at the right time. 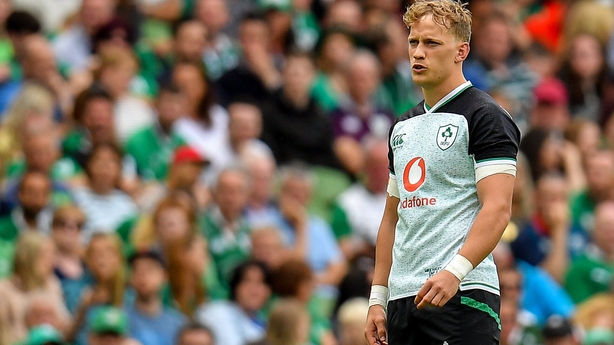 The debutant told reporters afterwards that he was just concentrating on fitting into the team.

"It would probably be more detrimental if I went out there and tried to do some individual brilliance but if I slot into the team philosophy that would be better for me," he said. It's a well-worn company line but with so many ahead of him for back-three positions he is only likely to make the squad should Ireland suffer a couple of unfortunate injuries.