Ireland lock James Ryan insists there is no cabin fever setting in as Ireland prepare to get their World Cup warm-up series underway against Italy on Saturday.

Forty-seven days out from the clash with Scotland at Yokahama, Joe Schmidt's side face into a schedule of four games in the next five weeks before departing for Japan.

The extended squad reported back for pre-season duty on 16 June, just three weeks after Leinster beat Glasgow to retain the Pro14 title.

Ryan, who was tonight named the Guinness Rugby Writers' Player of the Year, admitted it has been a hectic few months.

"My summer is a distant memory," he told RTÉ Sport’s Michael Corcoran

"It’s the hardest pre-season I’ve had. It’s my first time being in the camp this long with Ireland. It’s been tough, but I’ve enjoyed it."

With such a concentrated time in camp, is there a fear that cabin fever could set in?

"No, no there isn't. We have had a bit of down time in between the weeks we have been working hard. The balance has been really good in that regard

"The lads are rearing to go." 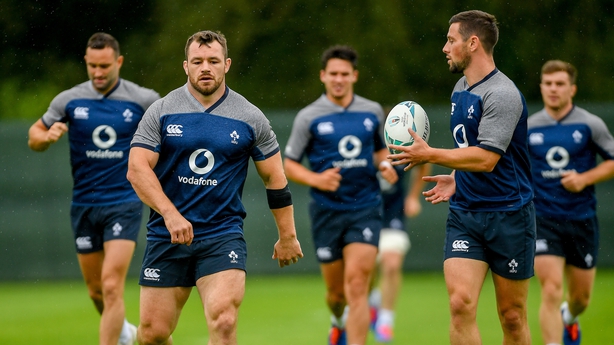 While some observers have questioned the importance of the warm-up games, Ryan, who was also named Players' Player of the year in May, believes players will be desperately looking to put down a marker.

Even those that don't make the initial World Cup squad may have a part to play.

"It’s important for everyone that if you want to be on the plane, you have to put in an accurate and committed performance.

"It’s going to be a tough selection for the coaches, but there will be injuries unfortunately, it’s part of the game.

"The guys that are picked will have to put the right foot forward and those that aren’t will have to ready too.

"Italy is where it starts."

Ryan succeeds Johnny Sexton as the Rugby Writers’ Player of the Year and while last season’s personal achievements have been parked, the 23-year-old says it is an honour to receive the award.

"I am delighted. On the one hand it is lovely to receive that recognition, but on the other hand, last season seems like a distant memory at this stage."

Congrats to Ciara Griffin on winning the Guinness Rugby Writers of Ireland award for Women's Player of the Year ?? https://t.co/CQMK9FJjFz pic.twitter.com/DT7bGv5QXH

The Kerry native Griffin played in all of Ireland's Six Nations games, where her on-field performances coupled with her leadership as captain ensuring she was the stand-out player for the Irish women last season.

At the same ceremony, which took place at the Guinness Storehouse in Dublin, Ireland head coach Joe Schmidt was presented with the prestigious Tom Rooney award in recognition of his immense contribution to Irish Rugby.

Schmidt, who will step down from his role after the World Cup, leaves behind a legacy that includes three Six Nations titles, a Grand Slam, the country's first wins over his native New Zealand and two European Cup wins victories with Leinster.

Schmidt said: "I have thoroughly enjoyed my time in Ireland. My family and I feel that we have been made to feel part of the community here, right from the outset.

"We are not sure where we will be or what we'll be doing next but I’m really looking forward to the exciting challenge that lies ahead in the upcoming Guinness Summer Series in the lead up to the Rugby World Cup in Japan.

"The management and players at both Leinster and Ireland have been incredible to work with. I accept this award on all of their behalf and will be forever grateful to all of them for the privilege of working alongside them."