After the physical nature of the loss to Saracens in the Champions Cup final, Leinster coach Leo Cullen was pleased with the way his side lifted themselves in accounting for Munster in the Pro14 semi-final.

A 24-9 victory at the RDS saw Cullen's side through another decider and a date with Glasgow in Celtic Park next Saturday.

"We're delighted to be in another final particularly after the loss last week," was the instant reaction of Cullen when he spoke to RTÉ Sport after the game.

"It's always a difficult week trying to lift the guys but credit to them they worked incredibly hard.

"It was a very physical game last week but coming back to the RDS does make a huge difference in getting things back on track.

"There's so much work  that goes in trying to get the semi-final in the RDS from all the players and the staff. There are lots of things for us to be appreciate of. Over to Celtic Park we now go.

In assessing the nature of the win over their provincial neighbours, the coach highlighted a period just before half-time that was crucial following on from what happened at the same juncture in Newcastle last Saturday.

"I thought it was a bit scrappy in the first half. We were a little bit inaccurate at times. Thankfully we managed the period just before half time slightly better than we did last week. We got the penalty just before the break to give us the lead, to give us a little psychological advantage. 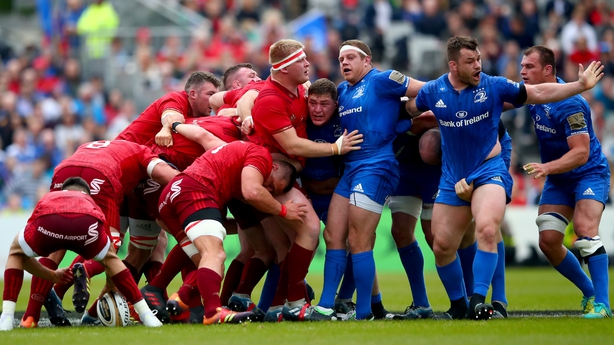 "The guys started the second half pretty brightly, controlled the game pretty well. We got the try where the front row did pretty well, nice bit of interplay from loosehead to tighthead that saw the hooker (Sean Cronin) score. That was very pleasing, a rare sight

"We managed to control the game ok. There was a big turnover from Scott Fardy where Munster had a bit of pressure on our '22. The try at the end was a little bit of gloss on the scoreboard."

A downside for Leinster was the knee injury picked up by Devin Toner after he was wrestled to the ground by John Ryan and Dave Kilcoyne and was on crutches by the final whistle.

At this juncture, Cullen believes the player is "unlikely" to start next week.

"He has twisted his knee, he's looking a bit gingerly at the moment. We will get him assessed. He's looking unlikely for next week. From what I understand he should be ok for the World Cup."