Leinster will face Glasgow Warriors in next weekend's Pro14 final after seeing off the challenge of Munster in Saturday's semi-final clash at RDS.

A 55th minute try from Sean Cronin and another from James Lowe in the final play of the game gave the scoreboard a distinctly unhealthy look from a Munster viewpoint.

Johann Van Graan's team have now lost four successive semi-finals across European and domestic competition. The last time they progressed beyond that stage was in the 2016-17 Pro14 campaign, when they were blitzed by Scarlets in a high-scoring Aviva Stadium decider.

From the second half onwards, they never really looked like ending their last-four losing run here.

The visitors were highly competitive in the opening half with Joey Carbery's 25th minute penalty giving them a 6-3 lead.

Leinster were reduced to fourteen at that stage, James Lowe sent to the bin for a deliberate knock-on with Munster spying a four-man overlap on the right wing. 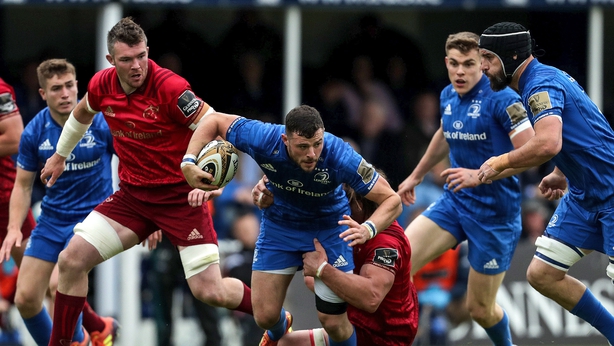 However, the hosts were clever during that ten minute period. Their back row consistently came up trumps throughout the afternoon with Josh Van der Flier and Scott Fardy repeatedly forcing turnovers to stall Munster attacks.

It was after a Van der Flier inspired turnover that Byrne found touch to relieve the pressure on the 14-man hosts. Off the back of the lineout, Munster were punished for straying offside and Byrne levelled the scores.

The home side would score with the clock in the red in both halves. A glorious Jordan Larmour break, in which the full back jinking past four tacklers, teeing up a penalty. Byrne did the needful and the home side jogged down the tunnel with a three point lead.

Niall Scannell was sent to the bin early in the second half after Luke McGrath cleverly flung a pass in the retreating hooker's direction.

Scannell and Byrne then swapped penalties before the game's key score. Dave Kearney crashed through the initial tackle before being brought to ground inside the Munster 22, and superb cleanout work from James Lowe created quick ball.

The home side shifted the ball across the pitch to the right wing, where the entire front row galloped through in a line. Healy popped a pass on to Furlong who whipped one out to Sean Cronin.

The hooker, using Fardy on the touchline as a decoy, opted to straighten his run and barrelled over for the game's opening try. Byrne converted to make it 19-9.

Munster pummeled away but were undermined by a combination of their own errors and Leinster's formidably alert backrow.

Joey Carbery poked a beautiful kick into the corner at one point forcing a Leinster lineout metres from their own line but Tadhg Beirne was immediately penalised for jumping across into Ryan's path, surrendering the opportunity to exert pressure.

At one stage, Munster got to within five metres of the line, with Niall Scannell and Jack O'Donoghue making powerful carries but, in a pattern that repeated itself throughout the 80 minutes, Fardy snaffled the ball as the try line beckoned.

The clock was now the enemy and Munster offered nothing little in attack in the final ten minutes. Their attempt, in the last five minutes, to work the ball through the hands from their own 22, ran aground on the Leinster ten metre line as O'Mahony's tired offload drifted behind Stander and out of play.

There was time for one more score. With the clock ticking past 80 minutes, replacement scrum half Nick McCarthy flung the ball wide at the back of the scrum. Henshaw helped it on to the electric James Lowe who fended off a couple of tired tackles from Scannell and Chris Farrell to touch down in the corner.

Munster face into a summer of more soul-searching while Leinster prepare for a Celtic Park showdown with Glasgow.

The only dark spot of the afternoon for the hosts was the injury to Devin Toner, who injured his leg after being wrestled to the ground by John Ryan and Dave Kilcoyne and was on crutches by the final whistle.