Ulster head coach Dan McFarland has named his team for this Friday's Guinness Pro-14 semi-final with Glasgow Warriors at Scotstoun.

There are two changes to the team which accounted for Connacht in the quarter-final, with Jacob Stockdale and Louis Ludik coming in for Michael Lowry and Robert Lyttle.

The most recent meeting between the clubs saw Glasgow emerge comfortable winners, and Ulster director of rugby Dan McFarland has been impressed with the Scottish outfit this season.

"One of the things that's been very noticeable for me this year is how their pack has improved," said McFarland ahead of the game.

"They're very strong around their lineout, their set-piece play. Their scrum has looked good this year.

"Their half-backs (are) young, they're exuberant, there's a lot of skill there. They play with no fear, and that creates a lot of opportunities for them."

Luke Marshall has found his form since returning from an ACL injury he suffered in a Champions Cup play-off with Ospreys a year ago.

He has played in four games, and McFarland says his return has been important for the province.

"Lukey is an understated fella, but you can't understate what he offers for the team," according to MacFarland.

"There's an essence about him that just says 'Ulster Rugby.'"

McFarland added: "He did his ACL making a tackle that was absolutely pivotal in the corner chasing a cross. Three players smashed the Ospreys player into touch. It was a sacrifice on his part that had that every inch attitude that I love in the guy so much.

"When he comes back in he offers that, he gives absolutely everything. When you add that to the quality with which he plays, it's a potent combination."

The northern province are looking to book a place in a domestic final for the first time since 2013, when they were beaten by Leinster. There hasn't been a trophy on display at Ravenhill since 2006, but McFarland says they're not thinking about that just yet.

"Everybody plays to win, we're no different from anybody else. The joy for me, and the joy for the players comes in where your feet are.

"You come in every day, you prepare, you do the best that you can do, you enjoy the getting better every day. When you can stick those things together, you end up consistently competing for championships... and then hopefully silverware comes."

Meanwhile, DTH van der Merwe returns for the hosts, after earlier being ruled out for the rest of the season following shoulder surgery in February.

Jonny Gray also comes into the starting XV, with Tom Gordon dropping to the bench. 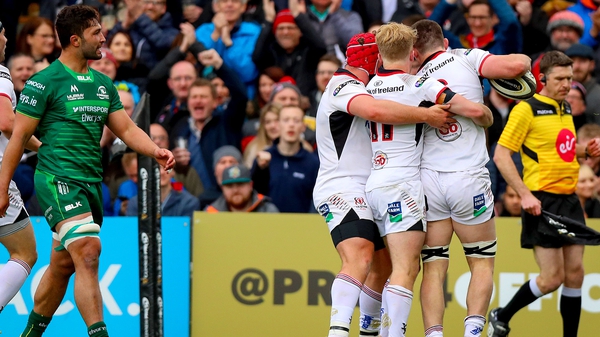