Ulster book a place in the PRO14 semi-final after beating Connacht 21-13 in a closely-fought encounter at the Kingspan Stadium.

The winners now meet Glasgow at Scotstoun on 17 May after outscoring the visitors two tries to one with Nick Timoney grabbing the northern province's first after 14 minutes in a tense knockout clash.

Ulster were ahead 11-3 at half-time after taking an early 8-0 lead and the hosts were never headed.
Ulster's other points - on what was skipper Rory Best and replacement Darren Cave's final game at the Kingspan - came from a conversion and two penalties from John Cooney and a Billy Burns conversion.

Connacht, who trailed their hosts by just a point on two occasions, scored one try through Bundee Aki, with Jack Carty kicking a conversion and two penalties.

The first points fell to Ulster who, after a strong start, won a kickable penalty which Cooney slotted after five minutes.

Ulster had the opening try after 14 minutes and it came from a Tiernan O'Halloran spill from a high ball, the home side countering through Robert Baloucoune before, moving left, Coetzee's off-load allowed Kieran Treadwell to ride a tackle and supply Timoney.

The flanker stepped inside and lost the covering Matt Healy to score though Cooney failed to add the conversion.

Connacht needed to score next and came close only for a Ross Kane tackle to dislodge the ball from Ultan Dillane's grasp.

They did get off the mark after 29 minutes through a Carty penalty after Ulster had gone offside following a dangerous Healy break.

The half ended with Aki hitting Burns high with Andy Brace awarding a penalty and opting not to show a card.
Cooney, who had earlier returned from a head injury assessment, slotted the kick to put Ulster 11-3 up as the sides trooped off. 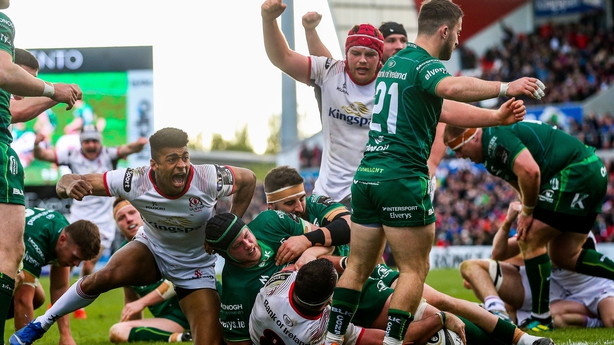 The first opportunity to move the scoreboard on in the second half fell to Connacht seven minutes after the restart but Carty pushed his penalty wide after the visitors had won the shot at goal from a rolling maul.

Connacht scored a try through Aki after 54 minutes, with the score coming off an intercept by Colby Fainga'a from Burns, the flanker drawing the cover and then supplying centre Aki who ran in under the posts. Carty's straightforward conversion cut Ulster's lead to one point.

The home side responded only for Aki to strip Stuart McCloskey near the line but shortly afterwards they won a penalty and Cooney slotted the 61st-minute chance to put Ulster 14-10 ahead with their
first points of the second half.

Six minutes later Coetzee was penalised at the breakdown and Carty's second penalty drawing his side to within one point of Ulster once again.

But Ulster came again and after Luke Marshall's kick had put them deep in Connacht territory they kept the ball through multiple phases before Coetzee powered over from close range, with Burns adding a superb conversion to make the final score 21-13.