Monday brought mixed emotions for Munster with the news that Johann Van Graan is committing his future to the province until 2022 being quickly followed by the disclosure that Joey Carbery is likely to miss the Champions Cup semi-final against Saracens.

Carbery limped off the field shortly before half-time in the Murrayfield quarter-final against Edinburgh, prompting immediate suspicions that he'd suffered a recurrence of the hamstring injury which sidelined him for the closing weeks of the Six Nations.

Van Graan admitted this afternoon that his chances of recovering in time for the semi-final in under a fortnight's time were slim with Tyler Bleyendaal expected to deputise.

RTÉ rugby analyst Donal Lenihan praised Bleyendaal's recent form but insists that the absence of Carbery is a severe blow to Munster heading into an already daunting semi-final.

"Softening the blow is probably the right phrase, but it's a blow nonetheless," the former Ireland lock told RTÉ 2fm's Game On.

"Joey Carbery has been brilliant since he came down from Leinster. He has this rapport now with the fans. I think he's been electric at times. He's shown real character at various stages throughout the season. 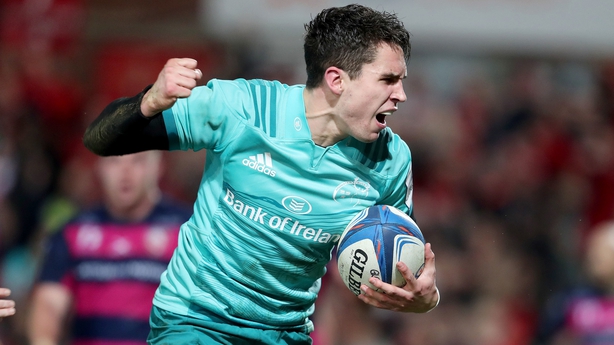 "Also the fact that he had penned a new contract to confirm that he too would be there for the next two years. Took all that uncertainty about his future off the table. Would he go back to Leinster? He boxed all that off.

"It's just unfortunate. You knew when he came off the field in Edinburgh that it was recurrence of the hamstring strain.

"It's not ideal but that said, Bleyendaal has been there before"

"He is going to be a massive loss against Saracens. You need to be at your absolute best if we're going to beat them, particularly in Coventry.

"The comforting point is that Bleyendaal did come on and play really well in Edinburgh. He'd a couple of vital moments in the game. He played well again the other night against Cardiff. So at least he's had a good run in to this game.

"It's not ideal but that said, Bleyendaal has been there before.

"He was out-half when they played against Saracens in the semi-final in the Aviva a few years ago. He's an experienced player. He's been around the block a while.

"It's great to see that he has these games under his belt and that he's playing well."