John Fogarty says Leinster are "delighted" to have home advantage for the Champions Cup semi-final, and admitted that playing in the Paris La Defense Arena would have been an unwelcome distraction.

And that would have been the destination for their semi-final had Racing 92 been able to overcome 14-man Toulouse at the same indoor venue on Sunday.

But a 22-21 victory for the four-time champions means it is the French who must travel to Dublin on 21 April.

Scrum-coach Fogarty and the rest of the management team were in Paris for the all Top 14 showdown in the modern, fully covered stadium.

"It was quite the spectacle; it was an incredible experience to watch a game there for sure," he said.

"It’s hugely important. There is home familiarities when you get these homes games. The Aviva has been good to us but we’ve got a lot of work to do." 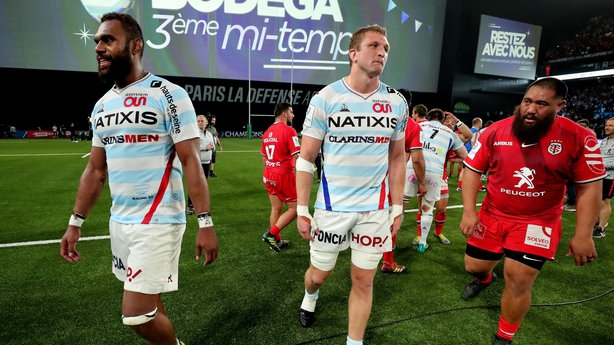 The Dublin 4 showdown will be the third meeting between the teams this season with Leinster losing by a point at the Stade Ernest-Wallon in October, before claiming a 29-13 win at the RDS in January.

Asked what impressions he took from watching their opponents battle it out in Paris, Forgarty said: "What we saw a very ambitious, very confident Toulouse team beat a Racing team that was pretty much fired up to get into a semi-final.

"It was a great game to watch, they are such a dangerous side but when you kick loose to a team like Toulouse you really have to have your defensive structures in place.

"Racing weren’t quite there in that part of the game and they came undone."

Leinster will definitely be without Josh van der Flier and Dan Leavy, who are both on the long-term injury list.

Centre Rory O’Loughlin (hamstring) won’t feature against Treviso this weekend, while Rhys Ruddock (neck and head) and Jamison Gibson-Park (HIA) are also injury concerns after the win over Ulster.

Devin Toner, Johnny Sexton and Robbie Henshaw have not been ruled out for Saturday’s game, however.