Jonathan Sexton will be fit to play for Ireland against Italy in their forthcoming Guinness Six Nations game with Italy on Sunday, 24 February.

There were fears that the out-half and current World Player of the Year was set for a spell on the sidelines after he was taken out of the 22-13 win over Scotland at Murrayfield last time out.

He was withdrawn to undergo a Head Injury Assessment (HIA) before half-time and he played no further part.

But Ireland defence coach Andy Farrell says Sexton is good to go and he also had other positive news on the injury front.

"He’s fine," said Farrell, speaking to RTÉ Sport. "He trained fully today and he will be ready to go.

"He’s had no symptoms at all and no complaints throughout the week. A session like that was pretty intense, it was a good hit-out and some contact within that as well, not too much, but enough and he would have been fine for this weekend."

Robbie Henshaw missed the win over Scotland having suffered a dead leg in the opening day defeat to England and will train next week, meaning he is likely to be considered for selection against Italy.

The Ireland management are a little more cautious about Garry Ringrose, who is nursing a hamstring complaint, while second-row pair Tadhg Beirne and Iain Henderson are working their way back to fitness.

Henderson will feature for Ulster on Friday night against Ospreys in the Pro14 and Beirne is working with the Munster backroom team.

"Robbie Henshaw will be fit to train next week, Garry Ringrose we’ll assess how he’s going over the weekend and we’ll see where we are next week with him," said Farrell.

About Beirne he said: "He’ll have to get through the protocols. We’re in contact with the provinces all the time and he’s progressing well and we know that for sure.

"It’s great to be getting players back. It’s nice to get a boost throughout the Six Nations. Obviously when you start and you have a few injuries they can be a bit of a loss, but for fresh guys to come back in and in good spirits it will give everyone a boost."

Farrell will take over as Ireland head coach after this year’s Rugby World Cup when Joe Schmidt steps down.

One player he definitely won’t be able to call on for his first Six Nations campaign in charge is Sean O’Brien, who recently announced his move to London Irish at the end of the year.

The IRFU’s selection policy means it’s unlikely that he will play for Ireland again as he will be based overseas.

"When you lose a player like Seanie, no matter what the situation - through injury or he decides to move on to pastures new, it’s going to be a wrench for everyone," said Farrell. "I’m chuffed for him and he’s happy with the move - he’s chuffed with where he’s going to go." 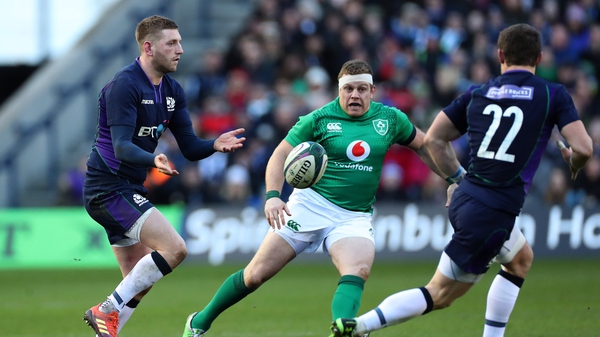