Connacht’s Quinn Roux has been called up to Ireland’s Six Nations squad as a replacement for the injured Tadhg Beirne.

Versatile forward Beirne has been ruled out of the first two rounds of the Six Nations, games against England on 2 February and Scotland seven days later, with a knee injury picked up in the Heineken Champions Cup win over Exeter on Saturday.

Roux captained Connacht to their Challenge Cup win over Bordeaux at the weekend, guaranteeing the province’s passage to the knock-out stages, and has been given the nod by Ireland head coach Joe Schmidt.

Meanwhile Adam Byrne, who helped Leinster secure a home Champions Cup quarter-final with victory over Wasps on Sunday, will travel to Portugal for Ireland's training camp this week as Andrew Conway picked up a knock during Munster's round six win over Exeter.

Conway is unable to train this week but expected to be fully fit to train next week, ahead of Ireland's eagerly-awaited opening clash with England.

Having missed the game against Wasps due to a shoulder injury, Jack Conan will continue his treatment at Leinster this week and should be fully fit again next week.

Rob Kearney and Jack McGrath will remain with Leinster in order to gain game-time in the Pro14 against Scarlets on Friday. All other players reporting niggles from the weekend's European matches will be managed by the Ireland medical team in Portugal. 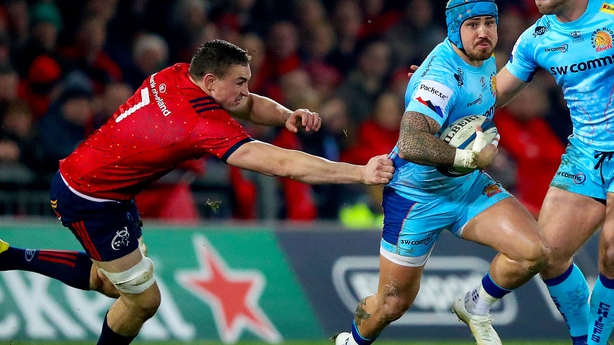 "I don’t want to make any predictions but he might be out for a long time," he said.