Leo Cullen's reigning champions cruised out of Pool 1 and secured home advantage for that last-eight clash thanks to a controlled and dominant display at the Ricoh Arena.

Jones watched from the stands as England lock Joe Launchbury went off after just nine minutes, while his Red Rose colleague Brad Shields did not even start.

Shields was ruled out by a side strain, and Launchbury - although he passed a head injury assessment - did not rejoin the action following a knock. 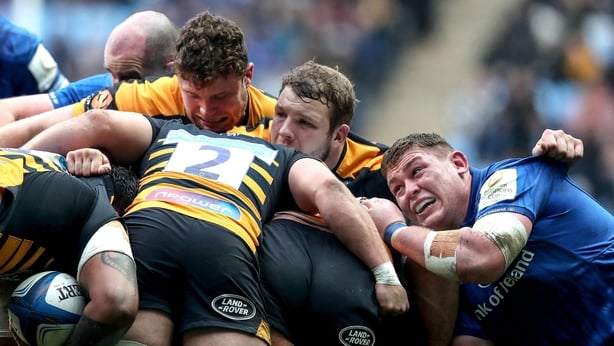 England's Six Nations opener against Ireland in Dublin is just 13 days away, with Saracens revealing on Saturday their fly-half and England captain Owen Farrell had undergone thumb surgery that is set to sideline him for seven-10 days.

None of this will unduly concern Leinster who progress as third seeds behind Saracens and Racing 92 after first-half tries from centre Garry Ringrose and hooker Sean Cronin rewarded a dominant opening half.

Fly-half Ross Byrne added kicked conversions and two penalties to effectively end the contest after 40 minutes, but Leinster, who beat Wasps 52-3 three months ago, were not finished.

Cronin claimed a second touchdown, then Noel Reid added a bonus point-clinching try 10 minutes from time, with Byrne completing a hat-trick of conversions and Reid adding the extras to his score before booting a late penalty. 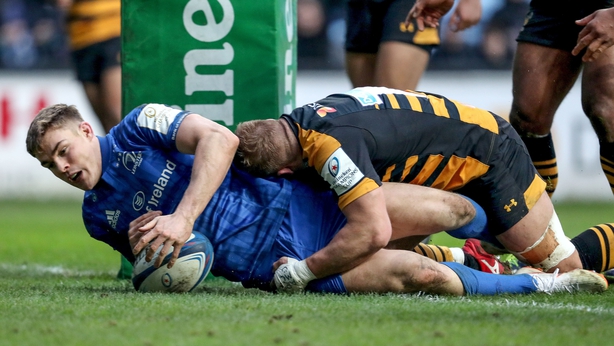 Wasps, already eliminated from the competition and resigned to finishing bottom of the group, saw England forward Hughes require treatment on his right ankle after just three minutes, but he carried on as Leinster pressed for an early score.

Things got worse when Wasps skipper Launchbury went down following a ninth-minute collision before departing for a head injury assessment which proved the end of his match, despite passing it.

In his absence Leinster moved ahead through Byrne before a fine approach by the forwards resulted in Ringrose weaving his way over from close range for a try that was converted.

Wasps could not escape from their own half, and Leinster simply went through the basics with impressive efficiency to keep the pressure piled on a spirited - but limited - home side.

They added a second try five minutes before half-time when Cronin emerged with the ball from under a pile of bodies after Leinster's forwards drove a close-range lineout, with another Byrne conversion taking Leinster 20 points clear by the interval.

Wasps at last gave their supporters something to cheer when Hughes crashed over for a 53rd-minute try that Sopoaga converted, but normal service was quickly resumed through a second Cronin try from another driving maul.

Robson then claimed an opportunist touchdown to put Wasps in double figures, yet Leinster regrouped and secured a five-point maximum when a slick move ended in Reid crossing near the posts.