Ulster head coach Dan McFarland hailed the efforts of his side after a 26-22 victory over Racing 92 left them in a strong position to qualify from Champions Cup Pool Four.

Jacob Stockdale starred again for Ulster with two tries, with their other score coming from debutant winger Robert Baloucoune, and McFarland admitted it was a special result.

"In the context of who we were playing against and the excitement of the rugby and some of the execution of the plays, it's certainly up there," he said.

"When you add into that the atmosphere in the stadium then wow, it was awesome."

McFarland also applauded the performance of Ireland star Stockdale, saying: "He's got a bit of stardust hasn't he?

"There are a lot of tired bodies in our changing room and when you spend a lot of the second half chasing after guys like Leone Nakarawa and his off-loads, and Virimi Vakatawa, that's hard work."

Ulster now go to Leicester Tigers for the final round of games sitting in second place on 18 points, three behind pool leaders Racing, who took two points from their first defeat of the campaign.

"We've put things back in our control. That's how we're looking at it," said McFarland.

"Forgetting the table, what a great place to try and go and win in a tight situation in European rugby. They are playing some nice rugby now and we'll look forward to that," he added of the trip to Welford Road, where victory will put them in the last eight.

"We're going there to win. That's what it's about." 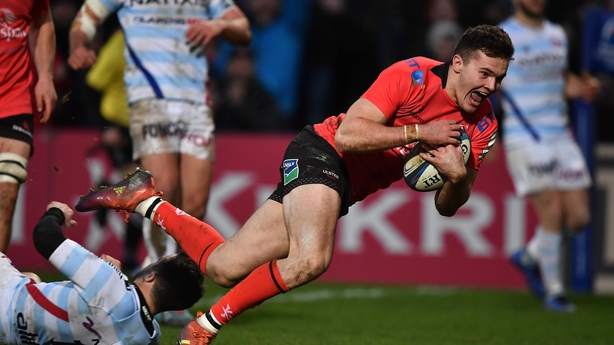 Racing scored four tries through Virimi Vakatawa, Simon Zebo, Brice Dulin and Oliver Klemenczak and came back after trailing 23-10 early in the second half, though Finn Russell missed three conversions.

However, Racing lock Leone Nakarawa remains confident his side will top the group, saying: "We still have the advantage.

"Our boys play as a family together and our aim is to win but I think we were unlucky here. But the bonus points will help us move forward from here.

"I think we started a bit slowly but though we came back it was too late."

Juan Imhoff had a try disallowed late in the game for a forward pass but Nakarawa did not feel it was a harsh call.

He said: "I think it was a forward pass, but the game is the game, sometimes you are unlucky and we can't change anything now."