Chris Farrell has emerged as an injury concern for Munster ahead of Friday's crucial Champions Cup game against Gloucester.

Farrell made a comeback against Connacht in Galway last Saturday playing the full 80 minutes of the Pro14 clash, but picked up a knee injury in the last play of the game.

He is due to see a specialist on Monday for a scan and further examination.

"Chris Farrell is gone for a scan on his other knee, it’s a big concern for us," Johann van Graan told RTÉ Sport.

"We saw a bit of pain on his face after the game, he obviously knows his body, I don't want to preempt anything, we will wait for the scan.

"He is such an important player for us, the few opportunities that he has had this year he has been incredible, the 80 that he put in over the weekend was close to special not only on the attack side but defensively as well, his work rate off the ball and his communication is so good, he literally got injured in the last play of the game."

Last march Ireland centre was ruled out for the remainder of the season after suffering an anterior cruciate ligament injury while on international duty.

JJ Hanrahan has an issue with his hip and is will also undergo a scan, Keith Earls strained his ankle strain but is expected to recover.

John Ryan is following return to play protocols while Chris Cloete, who injured his neck against Leinster, is expected to train fully this week.

Munster are top of Pool 2 but the group is finely poised with all four teams still in contention for a quarter-final place. 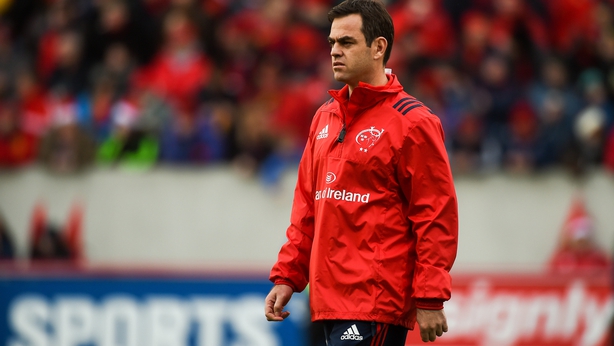 "It’s a massive game; the good thing about the pool is we have three points up on Castres and four up on Gloucester and Exeter," added van Graan.

"The most important thing for us is to focus on Friday night, focus on the process, get our bodies right, it’s only a six day turnaround.

"We used Saturday night as a big game for us, we did a lot of training- if I can call it that- in that game because most of our best players were on display, so this week is all about getting our bodies right to perform again on Friday night, going into that cauldron.

"There is a lot of history between Munster and Gloucester ad that was a big game the previous time we played against them.

"There will be a lot of emotion on Friday but the most important thing is to follow a process during the week, it’s another game in our season, another step, the stakes are very high this week and we will prepare as well as we can, enjoy the week because these weeks are special."