This game has been the standout fixture on the Irish rugby calendar for over a year.

In the last two days I’ve been surprised by the references to the 2016 game here when the physical nature of the match was over the top.

There is no question that two tackles from New Zealand in that match would result in red cards today; they just wouldn’t be tolerated any more.

Joe Schmidt seemed incredibly animated referring to that game in the press conference, anticipating it’s going to be an intensely physical battle, he's come out and said, ‘we’re going to give as good as we get’.

Both camps, Steve Hansen as well, have been throwing down the gauntlet in advance of this game, which really makes it a fascinating contest.

It’s number one against number two in the world and I’ve no doubt that both sides are going to be better than they were against Argentina and England last week.

Ireland must deny New Zealand time and space in order to beat them. The Irish who were involved in the Lions series last year (Johnny Sexton, Tadhg Furlong, Jack McGrath, CJ Stander, Pete O'Mahony) will know what it takes. 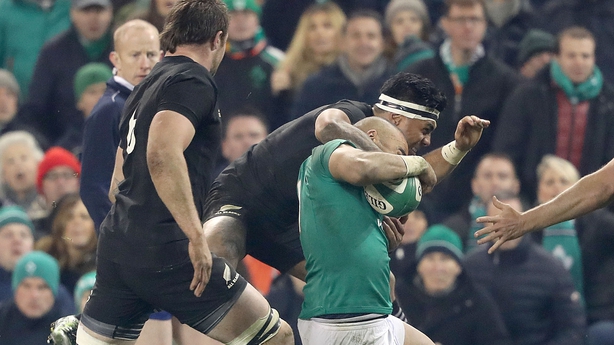 Likewise, New Zealand will be disappointed that it went down to the wire to beat England, 16-15.

For a lot of their players it will be their last game of the tour as they play Italy next week. I expect Hansen to make a lot of changes for that.

This will be his frontline team and he’ll want to make a statement 12 months out from a World Cup, especially against a team like Ireland, who are threatening their mantle a bit at the moment.

Ireland can win this but everything has to go right.

The bottom line is if we play to our best and they play to their best – particularly in the dry, crispy conditions that are forecast – their range of passing and offloading is just that little bit ahead of where we are.

I would see them as favourites to win the game. There’ll be little between them but New Zealand’s better attacking shape at the moment should see them shade it.