Ireland head coach Joe Schmidt has made four changes to his team to face New Zealand on Saturday, with experienced pair Devin Toner and Rob Kearney among the returning quartet.

The Leinster lock replaces Iain Henderson in the second row, while 32-year-old Kearney replaces provincial team-mate Jordan Larmour at full-back after sitting out the victory over Argentina with a shoulder injury.

Garry Ringrose has overcome his hip issues and resumes his midfield partnership with Bundee Aki, while Dan Leavy as expected is chosen as the injured Sean O’Brien’s replacement at openside flanker.

Schmidt revealed that Leavy - only returning from a sternum injury himself - did not train today as the coach manages his minutes ahead of the clash of first and second in the world rankings.

"We expect Dan to train fully tomorrow. He's only recently back playing after training, so we are trying to manage him. He trained really well on Monday and Tuesday. Today would have been a bit much. There was some soreness on the body."

Henderson is one Grand Slam winner from Twickenham last March to miss out, but the inclusion of Kearney, Ringrose and Leavy mean that only the Ulster second row and Conor Murray are missing from the XV that started that day against England.

The inclusion of 6’10" Toner is a clear indication that Schmidt wants to address a lineout that struggled on occasions, coughing up three throws. Toner, who has only missed five games in Schmidt’s tenure as head coach, will bring huge experience up against the formidable pairing of Sam Whitelock and Brodie Retallick.

James Ryan will partner Toner with Henderson dropping to the bench.

Luke McGrath has been unable to dislodge Kieran Marmion from the nine jersey in Conor Murray’s absence, with Johnny Sexton completing the half-back pairing.

Keith Earls and Jacob Stockdale continue on the wings, while Ringrose returns to his outside centre berth to win his 16th cap. Similar to the comprehensive win over Italy in Chicago, Aki will join the 23-year-old in midfield with Robbie Henshaw unavailable.

The final change sees the gifted Larmour drop to the bench with the 86 times capped Kearney once again entrusted with the 15 jersey.

New Zealand head coach Steven Hansen has made just one change to his team with Ryan Crotty replacing the injured Sonny Bill Williams in midfield.

Williams suffered a shoulder injury during the 16-15 defeat of England at Twickenham and will be replaced by the player who broke Irish hearts in 2013 with a late match-winning winning try at the Aviva Stadium.

Anton Lienert-Brown will come into the run on reserves in the 23 jersey. 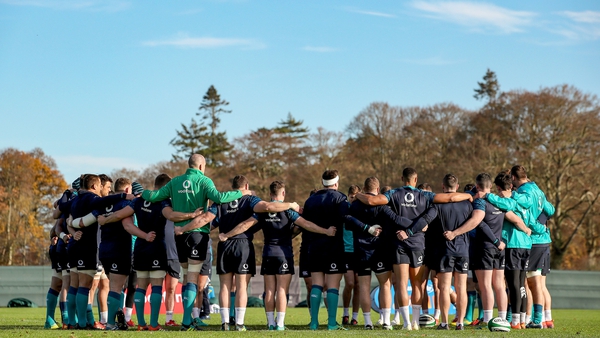 Toner and Kearney set to return to Ireland team