Donal Lenihan says Simon Zebo’s eagerness to impress Irish viewers could have lay behind his over-zealous try celebration against Ulster at the weekend.

The former Munster player publicly and privately apologised to Ulster full-back Michael Lowry when he appeared to taunt the 21-year-old before diving over the line in the comfortable Heineken Champions Cup victory at the weekend.

Speaking on 2fm’s Game On programme, Lenihan said that while it was an ill-advised moment from the Irish exile, he says it may have stemmed from his desire to impress against an Irish province.

"It wasn’t his finest moment. Simon Zebo is just one of these gregarious, exuberant characters," he said. "The moment got the better of him," he said

"I’ve seen a lot worse on the rugby field. To be fair to Nigel Owens, he spotted it straight away. He suggested to Zebo that he should apologise, which he did.

"As he said himself, he wasn’t proud of the moment, but at least he had the good sense to apologise and spoke to Michael afterwards"

"I think there is an element, and having spoken to Simon before he left to go to France, he knew the cost of going there. He knew it was putting him out of the reckoning for an Irish jersey.

"I think the fact he was playing against an Irish team, he knew everybody would be watching. He was so pumped up to do well. That try came late in the game and he got carried away.

"As he said himself, he wasn’t proud of the moment, but at least he had the good sense to apologise and spoke to Michael afterwards."

The 35-cap international told RTÉ Sport it was an "out-of-character" moment.

"I wouldn't like my kids to do something like that. You live and you learn. I apologise to the kid. He's a great kid, a great player. I gave him my jersey and apologised as much as I possibly could," said Zebo.

"There's no ill feelings between the two of us. It was just an out-of-character moment." 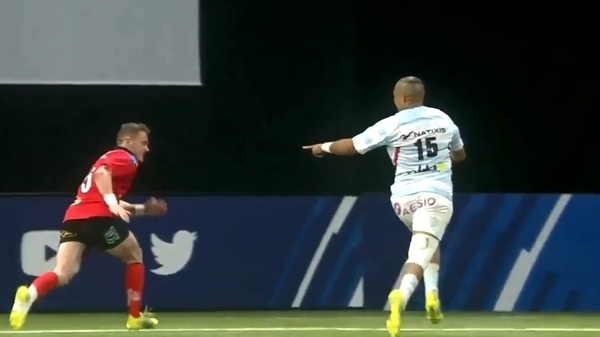