Simon Zebo has apologised for his conduct in the process of scoring a try for Racing 92 against Ulster in their Heineken Champions Cup Pool 4 clash on Saturday.

The Parisians eased to a 44-12 bonus-point victory at the U Arena with former Munster man Zebo continuing his excellent scoring form with a second-half touchdown, but the 28-year-old was contrite after the game as he reflected on how he celebrated his try.

Zebo pointed his finger towards Michael Lowry (20) before he dived into the corner, an act that prompted referee Nigel Owens to tell the Cork back to apologise to his opponent, which Zebo did.

Afterwards, he offered a full apology. 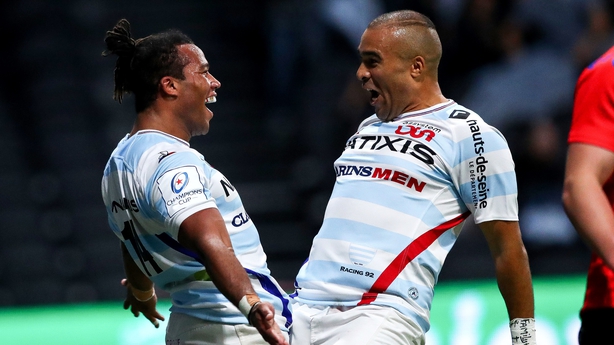 "It was nice to touch down. I got a bit too excited and I don't like to celebrate like that. It isn't in my nature, it's something I've never done in all my years of playing," he told RTÉ Sport's Michael Corcoran.

"I wouldn't like my kids to do something like that. You live and you learn. I apologise to the kid. He's a great kid, a great player. I gave him my jersey and apologised as much as I possibly could.

"There's no ill feelings between the two of us. It was just an out-of-character moment."

It was a great day at the office for Zebo and the Top 14 outfit.

Tries from Teddy Iribaren, Wenceslas Lauret, Juan Imhoff, Teddy Thomas and Zebo plus 18 points from the boot of Finn Russell blew Ulster away and made it two wins from two for Racing.

"It's so much fun," Zebo said when asked about how he's finding life in Paris.

"There's a lot of belief in our squad. If we're down by ten or 20 points we know that with three touches of the ball we can have three tries.

"Win, lose or draw, it's a family-orientated club and it's great to be a part of.  It's a special place. I'm lucky enough to call it home."