Connacht players and management have rejected Cian Healy’s claims that they offended Leinster and "did not take them seriously" when dishing out a 37-point hammering at the Sportsground last April.

Healy spoke of his annoyance at the weekend that John Muldoon took the final conversion in a 47-10 rout in what was the last act of the No 8’s Connacht career before he retired.

Connacht assistant coach Jimmy Duffy and back row Sean O’Brien said Tuesday the last thing they were trying to do was insult the Leinster players and all Muldoon wanted to do was sign off his playing career with a flourish.

The teams meet on Saturday for the first time since the incident and Duffy insisted they were more focused on preparing for the clash at the Sportsground rather than sifting through the embers of old fires.

"To be honest I didn’t really pay much attention to it. You’d have to ask Mul about that one. It was definitely something we didn’t plan on doing," said Duffy.

"It just happened, it was one of those things. It had happened even before we even realised it had happened. There was definitely not a disrespectful element to it, that’s important to point out.

"We’re just going to focus playing a quality opposition at the weekend and we’d be foolish not to."

O’Brien missed the game due to a concussion but from his Clan Stand view point, he felt the incident and Leinster’s annoyance was much ado about nothing.

"Look, I think that was just an off the cuff thing from Mul. I don’t think it was meant to be inflammatory in any way," said O’Brien.

"I think he just intended it as a good send-off for himself more than anything. I don’t think it was meant to be a slight at anyone.

"It [the win] was a great send off for Mul, and nothing short of what he deserved."

O’Brien has reported fit and well for action this week following another fine performance in victory against Scarlets last weekend, but the same cannot be said for his back-row partner and new captain, Jarrad Butler, and lock Gavin Thornbury.

Thornbury, who was let go from the Leinster underage set-up, has impressed for Connacht since he signed last season and he was recently called up to the Ireland training squad, but will miss the game this Saturday due to a shoulder injury. 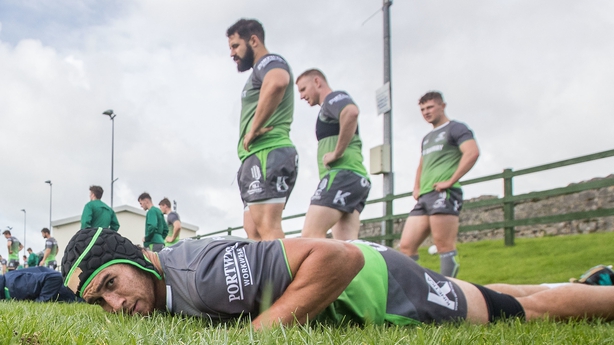 Butler, too, has a shoulder knock and sat out training on Tuesday, but has yet to be inked out of the match-day line-up.

"Gavin had a scan yesterday so we are just looking to find out what the damage is, hopefully it won’t be too long before he’s back," said Duffy.

"No [he doesn’t need] surgery, so the medics are going through that today, so fingers crossed for him. He had been going very well. I don’t he’ll be involved this weekend.

"Jarrad got a bang on the shoulder at the weekend so he had a light training day today. We are just going to monitor that but hopefully he’ll be back in on Thursday and we’ll keep a close eye on him."