The 21-year-old, making only his second start for the province, scored a first-half brace in their 32-13 Guinness Pro14 win over Zebre at the Sportsground.

"He’s just growing with every opportunity, every performance.

"I said at the start, it doesn’t matter about your age, if you are good enough you are going to play and he’s testament to that. He’s playing good rugby."

The 2016 champions began their campaign with a narrow defeat at home to Glasgow and Friend was delighted with his side's return to winning ways. 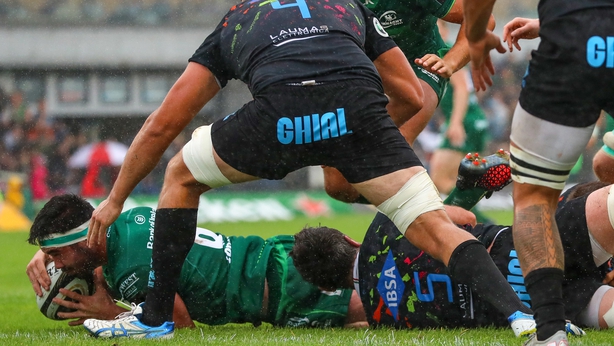 "I was really pleased with that, on the whole the boys played really controlled rugby," he added.

"They were composed in their decision-making, they were smart in how they looked after the ball, defensively we worked really hard and we shut them down.

"They are a team with a lot of threats but we didn’t really see that today, which is a credit to the defence.

"[The next game is] a huge test, Edinburgh were good [against Ulster].

"They controlled the game for about 50 minutes, opened a little door and Ulster were good enough to come through it.

"It’s a tough competition and if you’re not on your game teams are going to knock other teams off."

🎥💬 "Defensively we were much much better. They wanted to attack but they weren't allowed to, because our boys work really hard in defence. That laid the platform for us."