Australia boss Michael Cheika is an admirer of Ireland’s style of play, in particular how Joe Schmidt’s side slow down opposition ball.

The teams meet in Sydney on Saturday in the final Test with the series level at 1-1.

After 160 minutes of action the former Leinster boss knows full well what challenges lie ahead and is hopeful that they can match the "physicality" of the visitors.

"They are always going to bring physicality to it," he said. 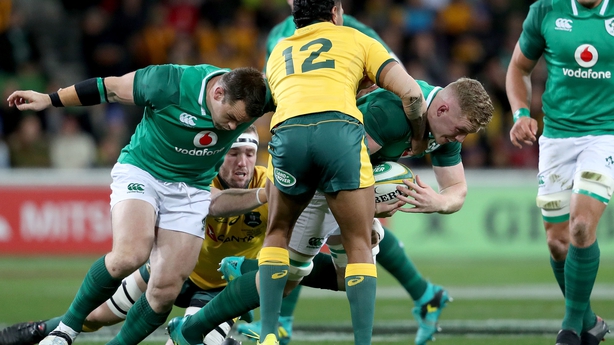 "They do that thing where they get two players connected beforehand and they try to ram you, one through the other, they’ve been good ‘cause they are big and strong.

"They’ve been tackling, folding in, rolling in the way ‘cause they want to slow our ball down so you need a physical presence to be able to do that.

"We’ve just got to get there before them, not let them [in] there and if they’re there we’ve got to get them out of the way with whatever means we need.

"It’s more about how you adapt as the series goes on because you do get to know the other team pretty quickly when you’re going back to back and then three games in a row."

One area that Cheika is targeting is discipline. Both sides conceded 11 penalties apiece in the opening Test, an 18 -9 win for the hosts.

The second game, a 26-21 win for the tourists, saw Australia concede 15 penalties to Ireland’s 12.

"I’m backing us to win the penalty count this week," added Cheika, who took over the Wallabies in 2014.

"Winning the penalty count would be a good lead-in to us having more field position, more ball and trying to put pressure on the opposition.

"I think we’ll be less conservative; you can’t win finals without scoring tries and playing footy.

"I’m a  true believer in that. They did well last week to restrict us.

"We’ll be looking to open up a bit, we have in all the games, with a bit more success [in some] than others.

"The last thing you do when the finals come is shrink, you want to go out there and play."