Michael Cheika says his Australian team cannot afford to concentrate too much on Ireland out-half Johnny Sexton this weekend, though admitted he is the "maestro" in Joe Schmidt’s side.

After landing the first blow in the three-Test series in Brisbane last week, the Wallabies will face an Ireland team showing eight changes on Saturday (kick-off 11am), including the return of Johnny Sexton in the number 10 jersey.

With Cian Healy and Tadhg Furlong returning in the front row, Dan Leavy at openside flanker and Garry Ringrose in midfield, Ireland have bolstered the starting XV with key members of the grand slam winning team, but Sexton’s inclusion will add a different dimension according to Cheika.

The former Leinster coach knows first-hand what the 32-year-old brings to the party having witnessed his early development in the province, and expects Sexton to be back in the groove in Melbourne.

"He’s the maestro. He’s running the show and in charge, directing traffic all the time. He’s a great competitor and he’s a great defensive player as well," he told RTÉ Sport.

"We can’t look at him in particular, because you could miss out on someone else. The way we try to deal with that is just to be connected ourselves [in defence]."

Sexton came in for some heavy treatment during the 2013 Lions warm-up game against the New South Wales Waratahs, coached at the time by Cheika and joked later that the Australian took great pleasure in his discomfort on the pitch: "Cheiks had a good laugh at it after the game".

Cheika suggested it would be a futile exercise to try and get under the skin of the former Racing 92 player.

"He is one of the toughest roosters out there"

"I saw Johnny what he wrote about the ‘Tahs in that game against the Lions. If we start going out of the line to try and do that stuff, we will get picked off. So easily. Good defence is about being connected.

"He is one of the toughest roosters out there, you are not going to knock him about."

The 51-year-old said he was surprised with the tough self-assessment from the Irish camp following the defeat – "I thought they were pretty good last week" – and was intrigued by how Ireland set up tactically to nullify the main attacking threats, notably marauding full-back Israel Folau and flanker David Pocock.

"If you saw the kick-off, it was really interesting tactic, they kicked off to Izzy [Folau] because they want him out of the game. They control him there and then he can’t get into the game on the other side," he said.

"With David Pocock, they will probably try to tie him up somehow, maybe carry ball at him. It’s going to be up to him to work his way out of it. For all players it is about the decisions you make on the run because the game changes very, very quickly.

"Adaptability is really important and Pocock is one of the best in the game at it."

Discipline will be at the forefront of the Australian minds after a good outing in Brisbane.

The visitors were unhappy with the decision making of referee Marius van der Westhuizen at times as both teams coughed up 11 penalties, with the Wallabies enjoying a clear advantage on the breakdown, conceding just 12 turnovers in attack compared to Ireland’s 21.

"The key thing is that we are trying to reduce penalties," he said.

"The margin that we normally have against Ireland really shrunk last weekend shrunk for us and we have got to keep that shrinking and turn that into a positive so we are giving away less penalties than them." 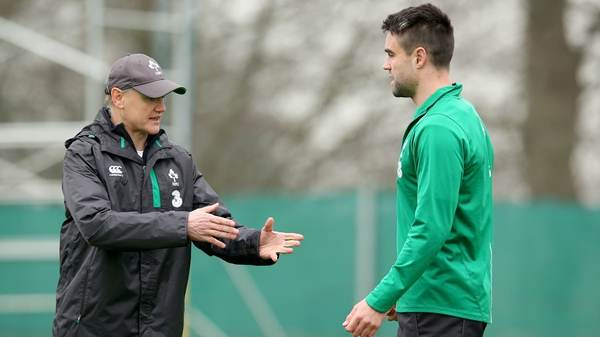 Schmidt: Conor lost his cool and that is unacceptable