Ireland will face Mark McDermott's Russia in next year's Rugby World Cup after World Rugby announced that Romania had been found guilty of fielding ineligible players during the European qualifying tournament.

Romania, Spain and Belgium were all found to have selected ineligible players during the qualifying tournament and were deducted points and fined as a result.

The Romanians had topped the group the took the automatic qualifying place with Spain finishing second for a play-off spot.

The issue came to light when Romania qualified for next year's showpiece event after Belgium claimed victory over Spain in controversial circumstances.

Spain claimed that the overcome of that clash was heavily influenced by the Romanian referee who took charge of the match.

That prompted World Rugby to launch an investigation and during that probe, the independent disputes committee discovered that all three teams had selected players that they should not have. 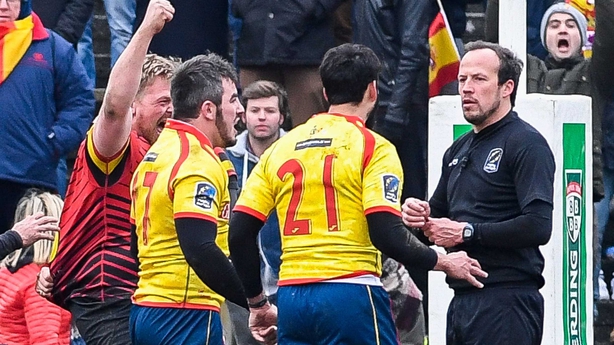 As a result all three countries have been deducted points and Russia now take the automatic qualification spot with Germany also elevated to a play-off against Portugal for a chance to meet Samoa with the winners gaining a place in the tournament.

A statement from World Rugby read: "Russia will qualify for Rugby World Cup 2019 as Europe 1, joining Ireland, Scotland, Japan and the play-off winner in Pool A, while Germany will progress to the European play-off with Portugal, subject to the appeals process.

"While the independent disputes committee has determined that mistakes were not made in bad faith by Rugby Europe and some participating unions, World Rugby is extremely disappointed with the unfortunate and avoidable events, as expressed when announcing the convening of the independent committee.

"The committee's decision and findings clearly demonstrate issues with the processes adopted by some of the participating unions relating to the eligibility of players as well as the delivery and organisation of the Rugby Europe Championship.

"World Rugby is committed to addressing these issues and will lead a review of European tournament delivery in the context of Rugby World Cup qualifying in full partnership with Rugby Europe."

The details of the punishment are as follows:

"The deduction of 5 points for any match in which a union fielded an ineligible player (40-point deduction for Spain, and a 30-point deduction for both Belgium and Romania). Therefore, based on a re-modelling of the Rugby Europe Championship tables in the context of Rugby World Cup 2019 qualifying, Russia would qualify as Europe 1 into Pool A replacing Romania and Germany will replace Spain in the European play-off against Portugal

"World Rugby Regulation 8 stipulates mandatory financial penalties for breaches of £25,000 per ineligible player for a union not represented on the World Rugby Council and £100,000 for a union represented on Council. Therefore, the following financial sanctions will be applied, suspended for a period of five years conditional that no breaches occur during that period: