Craig Gilroy is in line for a recall to the Ulster side to play Munster on Saturday.

The Ireland international was suspended by the province after details of a WhatsApp message he sent came to light during the recent trial of Paddy Jackson and Stuart Olding, two former team-mates who were unamimously acquitted of rape charges.

"He’ll be available for selection," said coach Jono Gibbes. "He’ll be in line for a place if his training this week warrants it."

Ulster are on a three-game winning streak and need to beat Munster at Thomond Park (5.35pm) with a bonus point to maintain their challenge for a play-off place in the Guinness Pro14.

"History would say that getting four tries in Thomond Park is pretty hard to do," added Gibbes.

They would also need Edinburgh to fail to pick up any points in their home tie with already-qualified Glasgow. 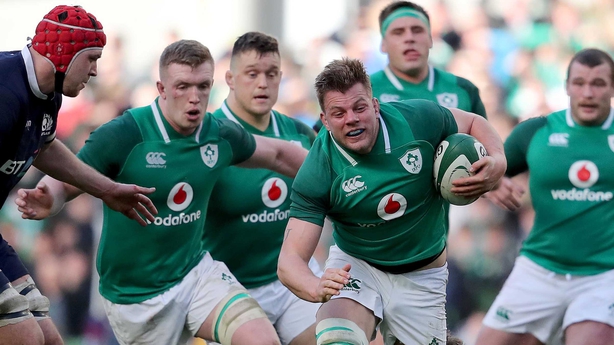 Meanwhile, Gibbes, who will leave Ulster at the end of the season for the head coach position at Waikato, has dismissed Brian O'Driscoll's comments about the province, which he described as "a bit of a basket case" due to issues off the field.

The former Ireland captain also said he felt Leinster's Jordi Murphy, in the current landscape, would, if asked, rethink his scheduled move to Ulster.

"It’s irrelevant," said Gibbes. "We’re just concentrating on what we’ve got to do.

"I think a guy like that, 100 Tests, is entitled to an opinion, but we’ve really got to get on with what we’ve got at hand."

There’s a very big difference between my comment of ‘if you asked him I bet he’d rethink his move now the landscape has changed since signing’ and your comment of ‘should be looking at ways to get out of his contract’. #justsaying https://t.co/HXkpLE6FId

Reports at the weekend suggested that Ireland boss Joe Schmidt wants one of two Leinster out-halves - Joey Carbery or Ross Byrne - to move to the province next season.

"It’s got nothing to do with us," said Gibbes.

"It’s just speculation. We work pretty closely with the IRFU and when we need to supplement our roster with certain players we work with them and that’s the system for all the provinces."