Simon Zebo walked towards the huge army of travelling Munster fans at the final whistle in Bordeaux and raised his hands to offer his applause.

They belted out the winger's name after watching their side fall to a 27-22 Champions Cup semi-final defeat to Racing 92, the club Zebo will join this summer.

The 28-year-old tossed his boots into the crowd and slowly left the field. Having entered the fray on 43 minutes, and played a central role in a gutsy second-half rally, Zebo's final European game for Munster left him with mixed emotions. It's the end of an era.

"It was incredible," he told RTÉ Sport when reflecting on the reception he received from the supporters.

"It was a great moment for me and my family, to get such a nice reception from the crowd. I would have preferred if it was a win obviously, but yeah, it was an emotional time.

"For my last game a final against Leinster would have been nice but you've got to play the cards you're dealt. We've got the Pro14 to look forward to now and hopefully end the season on a high." 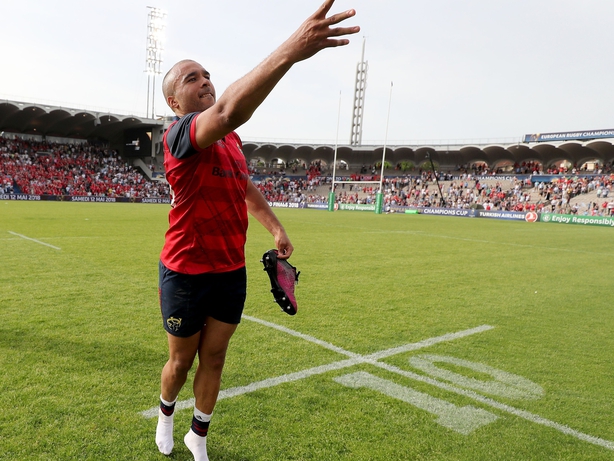 Munster ultimately paid for a nightmare first-half that saw Racing run riot. The Top 14 side exploded out of the traps, crossing the whitewash three times in the first 21 minutes and holding a 21-3 half-time lead.

That left the province with too much to do, though they did show plenty of heart in an improved second-half showing.

"It was difficult," Zebo added. "We didn't help ourselves in the first half. We gave ourselves a big mountain to climb. Ultimately we came up short.

"It was great spirit and fightback from the lads and it was true to he character that's in the team, not giving up until the final whistle."