The dream of an all-Irish Champions Cup final is over after Munster fell to a flattering five-point loss to Racing 92.

Leinster qualified yesterday with a handsome win over Scarlets but Munster were way off the pace in the heat of Bordeaux.

The visitors conceded three tries in the first 21 minutes and could make no impact on the Top 14 side, except for a solitary Ian Keatley penalty.

The Reds had spent time in South Africa on Pro14 duty before this tie but looked tired and affected by the 25 degree heat at the Stade Chaban-Delmas, slow with the ball in hand, unable to stem the sparkling Racing attack, and completing only 66% of their tackles in the first half.

Teddy Thomas scored two tries and Maxime Machenaud added another as well as adding 12 points from the boot.

Simon Zebo, Rhys Marshall and Andrew Conway scored consolation tries in the second half for the visitors but the tie was done and dusted at that stage. 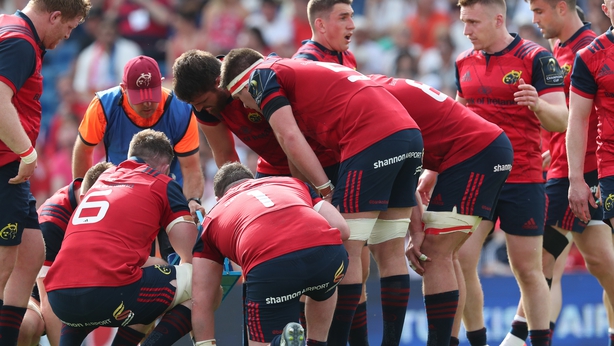 Munster needed to produce something special in the second half but it never looked likely, a five-minute spell of pressure after the break came to nothing and with that their chances were gone.

Zebo, who started on the bench and is bound for Racing next season, did manage a consolation try with 20 minutes to play and in doing so equalled the late Anthony Foley’s record of 23 European tries.

Replacement hooker Marshall and Conway crossed late on to reduce the deficit but it proved only a minor consolation.

One Munster man who will face Leinster in Bilbao on 12 May is Donnacha Ryan, the second row forward again producing a solid display to disrupt his former team-mates at every opportunity, most noticeably at the lineout.

"[Munster] are well able to up the tempo but it was small margins at the end," said Ryan afterwards.

"[I'm] bitterly disappointed for the lads, I know how much it means to them." 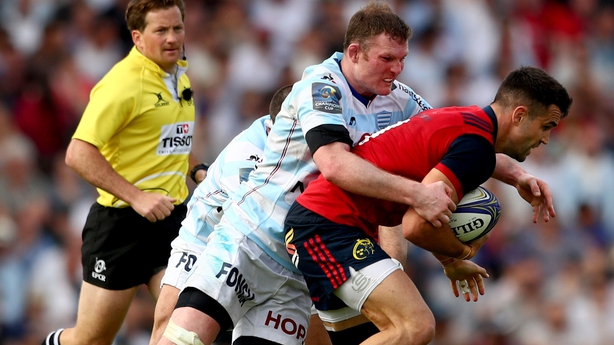 A memorable quarter-final win over Toulon will be the highlight of their European season but it ended in fierce disappointment with a complete no-show in France.

Lenihan added: "It's just one of those days where nothing has gone right for them.

"We hoped and prayed that it would be an all-Ireland final but it doesn't look like it's going to happen. I've been really impressed with Racing."

All of the damage was done at the start of the first half, Thomas crossed the line on five and 18 minutes after taking advantage of some poor Munster tackling on the right wing.

The France international could have had his hat-trick four minutes later but opted to pass to Machenaud after he had crossed the tryline.

Racing eased up from there on in and never looked like passing up their chance of winning their first ever Champions Cup title with the three late tries never threatening the result.

Racing's shot will come against three-time winners Leinster in the San Mames Stadium in Bilbao on 12 May.

27-22 but only ever 1 winner. Racing were v good at times but Munster made them look better by underperforming. Fantastic to see Teddy Thomas play so naturally. A special kid with a big heart.D Ryan massive work rate. Chavancy chopped everything.Strange game.