Back in 2002 Guy Noves felt he was missing a piece of the jigsaw.

The Toulouse boss needed some extra steel to get his side back to the pinnacle of European rugby.

Since winning the inaugural Heineken Cup in 1996, the the French outfit had not been able to replicate that success, and, in fact, failed to emerge from the pool stages in 2001 and the following year.

The team was star-studded – Poitrenaud, Ntamack, Jauzion, Garbajosa, Clerc, Michalak, Pelous – but they required something more, something a little less polished.

Then Trevor Brennan arrived from Leinster and they contested the next three finals, winning two.

"They felt that even with all these great players that they had and winning French Championship [in 2001] that they’d lost a bit of the fighting spirit and they wanted to bring that back," said Brennan.

They failed to get out of their Champions Cup pool, while off-field problems produced unwanted headlines.

On the domestic front they scraped through to the semi-finals of the Top 14, losing out to Clermont (below). 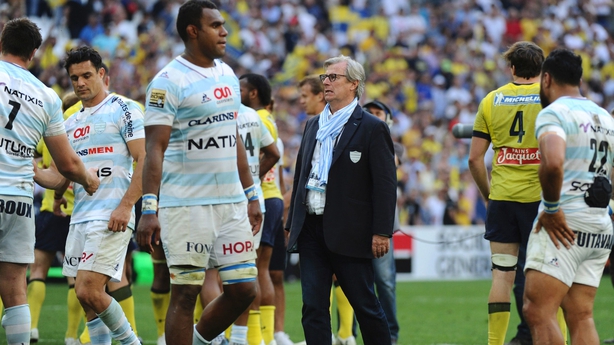 Again, the big names were there – Carter, Rokocoko, Thomas, Machenaud, Nakarawa – but more metal was required.

So when Donnacha Ryan came into the frame it seemed to be a perfect fit.

He’s not quite Brennan – no one is – but the Racing hierarchy, prodded by Ronan O’Gara, reckoned Ryan was a part of the solution.

"Players like that are not frequently available, so from Racing's point of view, it's a great signing," said O’Gara, who, as a coach with the Paris club back then, was involved in the initial approaches.

While Brennan was among the original exiles, a more recent emigrant is James Coughlan, who won 137 Munster caps before leaving for Pau in 2014.

He soldiered alongside side Ryan for many years in the red and knows exactly what Racing have on their hands and how he adds to their chances of winning today’s Champions Cup semi-final in Bordeaux (3.15pm).

"Racing have loads of flair players, a lot of guys that will do something special," Coughlan told RTÉ Sport.

"But they didn’t have someone who’d turn up every week and be at the same level regardless of whether it was at home at the U Arena or away to Agen or Oyonnax, wherever.

"There’s no stupid penalties, he’s aggressive, he’s tenacious, he’s all elbows and knees, there’s no soft part to him.

"Having that, and having the lineout and that bit of grunt.

"Donnacha worked with him for many years. In Irish camps and in Munster camps, Donnacha would have been a massive part of the lineout strategy.

"Racing didn’t have that. When he’s not playing you can see the difference. He does nothing fancy but everything he does is at the highest level.

"Like when they beat Castres away [in the Top 14], which is a very hard thing to do, he was in the team of the week.

"His level of performance is at the level needed to play international rugby and to be looked at by the likes of Racing."

The Tipp native missed out on a return to Thomond Park, where he’d spend 13 years, through injury last November but was front and centre when the sides met in January, earning a crucial turnover late in the game that set up the winning penalty for Racing.

"He was the difference in the game at U Arena," said Coughlan of the 34-30 win for the hosts.

"He went up, won that kick off.

"I’m sure at that lineout where Szarzewski scored in the corner, that was because he knew what way Munster were going to defend and had it teed up during the week.

"He does loads of the dirty work that nobody sees and is happy to do it and that was exactly what Racing needed."

The two teams will be forever intertwined through the death of Anthony Foley, who died in his sleep the night before their Champions Cup pool game in Paris in 2016.

But even before that O’Gara had moved directly from being Munster’s greatest ever out-half to a coach at the club.

Next season Simon Zebo will earn his crust in the French capital.

Greeting him with a broad grin will be 34-year-old Ryan, who has brought that extra hustle to the fold.

Coughlan says that the French think he’s similar to one of their own greats, a 66-times capped Toulouse forward.

"Guys like Johan Maestri, who would be a similar type player to Donnacha," says Ryan

"He’s the kind of player who is being mentioned of in the same breath. That’s how he’s seen here.

"I can’t remember him ever having a bad game.

"Ask anyone who played with him or against him, they’ll tell you the same. He’s fantastic, he has a massive engine on him."

That engine, that work ethic is what allows those flair players to do their stuff, argues Coughlan, now working in the Pau Academy.

"You need the counter-balance in the team," he says. "You couldn’t change a Fijian [Leone Nakarawa] like that.

"That’s not his game, he signed because he does get those offloads, he does get into the wide channels and runs at backs."

Johann van Graan will be hoping against hope that for some reason, Ryan has an off-day.

It's not likely, although he has been struggling with a knock in advance of the game.

However, Ryan, capped 47 times for Ireland, has been named to start alongside Nakarawa and key to Munster's hopes of making it to Bilbao is that both men have something that's not really in Ryan's make-up - an off-day.