The Spanish Rugby Federation is seeking a replay following their controversial defeat by Belgium on Sunday which meant they missed a chance to qualify for the 2019 World Cup.

Romania took their place in Ireland's World Cup Pool A after Spain's defeat, after which Romanian official Vlad Iordachescu was escorted off the field.

The 18-10 setback in Brussels gave Romania second spot behind Georgia in the Rugby Europe Championship standings.

Only the top two qualified automatically for next year's tournament in Japan.

Furious Spanish players pursued Iordachescu after the final whistle as coaching staff tried to restrain them while Spain's rugby federation said it had warned Rugby Europe, whose president is Romanian, about appointing a Romanian referee for a game of such importance for both nations.

World Rugby has contacted Rugby Europe already, and Spanish authorities have presented their own formal complaint in which they claim there has been "a violation of the principle of impartiality that must prevail in any sporting activity".

They also referenced the decision by World Rugby to remove Marius van der Westhuizen from duty for Ireland’s Six Nations grand finale with England at Twickenham on Saturday after he was involved in England training sessions as evidence of the impartiality they were denied.

Quoting regulation 18 6.1b of World Rugby – "if there has been a breach of the Statutes and / or regulations, there is the possibility of cancelling the result of a match and / or replay of a match" – the Spanish believe a replay should be granted. 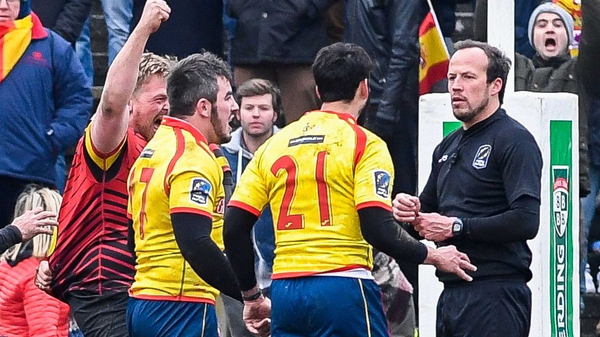