World Rugby has contacted Rugby Europe after Spain complained bitterly about the refereeing during their defeat by Belgium on Sunday which meant they missed a chance to qualify for the 2019 World Cup.

Romania took their place in Ireland's World Cup Pool A after Spain's controversial loss, after which Romanian official Vlad Iordachescu was escorted off the field.

The 18-10 setback in Brussels gave Romania second spot behind Georgia in the Rugby Europe Championship standings.

Only the top two qualified automatically for next year's tournament in Japan.

Furious Spanish players pursued Iordachescu after the final whistle as coaching staff tried to restrain them while Spain's rugby federation said it had warned Rugby Europe, whose president is Romanian, about appointing a Romanian referee for a game of such importance for both nations.

Spain will probably point to the decision by World Rugby to replace Marius van der Westhuizen as one of the assistant referees for the England v Ireland Six Nations clash on Saturday after he attended an England training session last week. 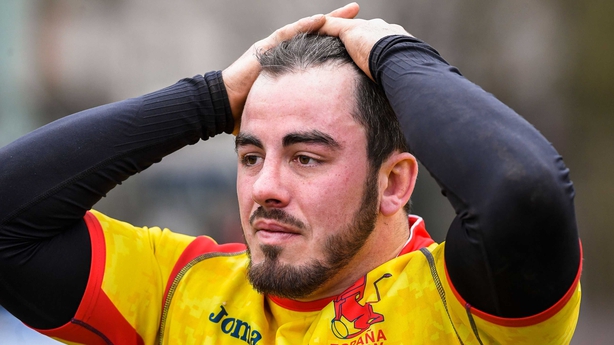 World Rugby, however, said it was not its place to interfere with the selection of officials by Rugby Europe.

"While World Rugby does not appoint match officials for the Rugby Europe Championship, it is in contact with Rugby Europe to understand the context of events relating to the Belgium v Spain match in Brussels on Sunday, which doubled as an important RWC 2019 qualifier," World Rugby said on Twitter.

Spain coach Spain Santiago Santos criticised Iordachescu in his post-match news conference, accusing him of not allowing his team to play.

"The difference between penalties against us and for us was huge," Santos said. "When we were trying to come back in the game the play kept on being interrupted. I said to one of the players that Spain didn't lose today, rugby lost."

"While we appreciate that this is a subject of high-emotion, it would be inappropriate to comment on match official performance before the usual full review has been undertaken," the organisation said.

Spain can still qualify but must beat Portugal in a playoff to set up a two-legged tie against Samoa.

If they beat Portugal but lose to Samoa they will play in a four-team repechage event in November in a last attempt to qualify for the World Cup for the second time following their appearance in 1999.