Ireland's Grand Slam dream remains alive after a bonus-point win over Scotland in Dublin that, coupled with England's loss in Paris, clinched the Six Nations championship for the third time in five years.

Before kick-off at Stade de France Ireland held a 44-point advantage on the scoring front and a 10-point lead over England in the table.

Eddie Jones's men needed a bonus-point win to keep their title hopes alive but they fell to a 22-16 loss that means their main motivation at Twickenham next week will be to shatter the visitors' dreams.

Joe Schmidt's men only took full control at the Aviva Stadium with 10 minutes remaining but two first-half tries from Jacob Stockdale, and further five-pointers from Conor Murray and Sean Cronin were enough to see off the dogged visitors.

The hosts settled early but couldn't score, Johnny Sexton turning down a very kickable shot at goal for a punt to the corner that came to nothing. 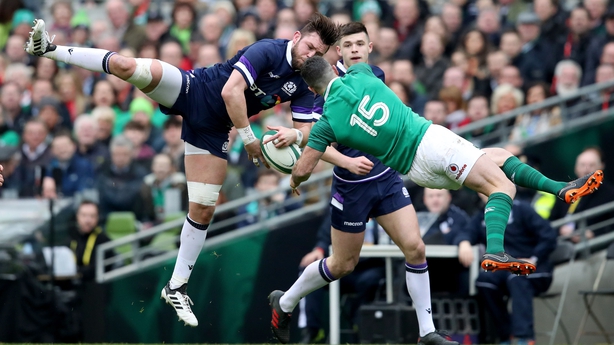 But Scotland, with just one foray into the Ireland half, went in front with a Greig Laidlaw penalty on 13 minutes, having enjoyed only 23% possession and 12% territory.

The visitors grew into the game and it was Ireland who looked unsettled and nervy but managed to score through another Stockdale intercept, adding to pick-offs against Italy and Wales for his ninth try in green.

"Hopefully that score will settle the team down," Bernard Jackman, on analyst duty with RTE Radio 1's Saturday Sport, offered. It didn't.

The play remained frantic. Ireland lost two of their own lineouts, Scotland one.

Then returning centre Garry Ringrose stepped inside his man and made 60 metres, the support piled in but too slow, penalty to the Scots, Stuart Hogg missed touch, Kearney returned it and Tadhg Furlong barrelled aside a couple of tacklers, then threw an intercept, Sexton took a quick lineout, Finn Russell took two, Scotland worked a two-on-one but with all the time in the world Huw Jones missed his full-back for what would have been a seven-pointer.

Amidst all this the visitors lost number 8 Ryan Wilson to injury, Cian Healy needed medical attention but stayed on. 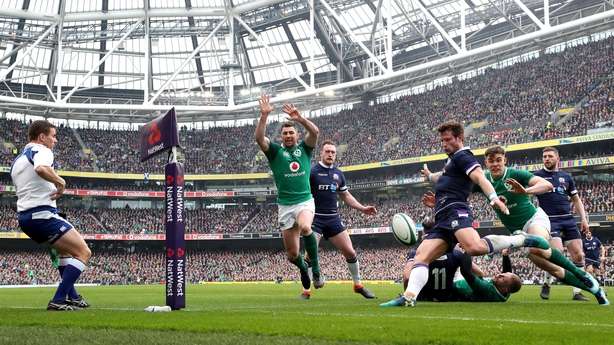 Gregor Townsend's side were staying true to the style that earned victory over France and England, Hogg, Jones and Peter Horne all looking dangerous with ball in hand. Ireland had to stay disciplined and they did.

Then James Ryan, a contender for man of the match, and Rory Best led a breakaway, Rob Kearney, who did get the best player nod, fed Murray close to the line, Bundee Aki was in support but got held up over the line.

Ireland went one way and then the other off the scrum, Ringrose found Stockdale on the wing, the Ulster man had work to do but made it look easy as he rounded Blair Kinghorn to dot down for number two in the corner, Sexton slotted the conversion and, somehow, Ireland had a 14-3 lead at the break.

With that score the Ulsterman equaled the championship record for tries in a season with six.

The sun came out for the second half and Ireland continued to shine. Perhaps lucky to get a scrum and a penalty decision in their favour from Wayne Barnes, the 2014 and 2015 champions took advantage, Murray powering over after a lineout maul and the out-half converting.

But Scotland responded with a try of their own, Kinghorn finishing clinically in the corner after a clever move off a scrum.

They could have had another from the next passage of play but this time Horne's pass was misjudged.

"All our defenders are coming in when the threat is out," pointed out Jackman as the familiar failing of allowing too much space on the flank reared its ugly head again.

It was clear that attack would be the best form of defence for Ireland and replacements Jack McGrath, Jordi Murphy and Iain Henderson, along with Furlong, all carried strongly to earn Ireland a 5m scrum.

A try looked certain as Ireland build up the phases close to the line but Ringrose was too slow to release and Scotland cleared, and came again.

Sexton, whose in-play kicking game was poor all day, missed touch and then decided to take on a shot from an awkward angle, he missed and the margin remained at 13 points with 15 minutes to play.

But as Scotland tired Ireland's replacements took over and Cronin finished off a maul to claim a bonus point with Sexton adding the extras, and securing the result with less than 10 minutes to play.