While Leinster already have their home quarter-final spot sealed ahead of their trip to France, Munster and Ulster both have control of their own destinies this.

Munster also have control of their own destiny as far as claiming top spot in Pool 4 goes.

A win at Thomond Park against Castres on Sunday (kick-off Sunday 1pm), they win the group, regardless of what Racing 92 take from their trip to out-of-contention Leicester, who suffered a 39-0 loss to Castres.

A bonus-point win should secure a home quarter-final as one of the top four seeds, while a victory of any sorts guarantees a place in the knock-out stages, where an away last-eight encounter most likely awaits.

Should Ulster return from Coventry (kick-off Sunday 3.15pm) with a bonus-point win against Wasps, who were beaten by Harlequins on Saturday, they would top Pool 1.

However, the 2004 winners still have an outside chance, so Ulster cannot afford to think in bonus-point terms for the game where a four-match-point win would be enough for qualification for the next round.

Even a losing bonus point could get Les Kiss’s side over the line. La Rochelle, however, remain favourites to top the table as they host already eliminated Quins and would expect a full haul of points from that fixture.

Leinster completed their pool campaign with a 23-14 over Montpellier to record their ninth successive victory in all competitions. Ross Byrne, Robbie Henshaw, Sean Cronin all crossed the whitewash to emphatically move into the knock-out stages. 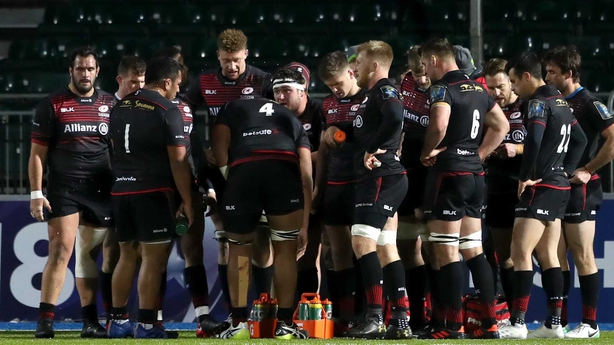 Elsewhere, champions Saracens now realistically need a bonus-point victory over Allianz Park visitors Northampton next weekend to have any chance of progressing as a best runner-up from Pool 2.

But even then, their European title hat-trick bid staying alive will still hinge on results elsewhere, while Ospreys must beat Clermont Auvergne in France to have any chance of progressing.

Scarlets need two points from their home game with Toulon to progress, while a win would mean they finish top of Pool 2.

In Pool 5 of the Challenge Cup, unbeaten Connacht's draw with Worcester sees them safely through to the quarter-finals and a win over Oyannax (kick-ff Saturday 2.30pm) would result in a home tie.