Connacht have qualified for the Challenge Cup quarter-finals, after rallying from 10 points down at half-time to secure a 24-24 draw against Worcester Warriors.

The result sees them top Pool Five, and a win against Oyonnax next weekend will ensure they get home advantage in the quarter-finals.

The second-half fightback helped Connacht preserve their unbeaten run in the Pool, and despite losing their 100% record, they still maintain their six-point advantage over the Warriors.

Tires from Perry Humphreys and Sam Lewis and a conversion from Chris Pennell saw Worcester race into a 12-0 lead just four minutes into the game.

Connacht responded with tries from John Muldoon and Niyi Adeolokun but further scores from Humphreys and Josh Adams sent the Warriors into the half-time break 24-14 up.

Muldoon marked his 50th Challenge Cup appearance with a try on 17 minutes, in which he collected possession from a scrum and touched the ball down underneath the posts.

Connacht kept the hosts scoreless in the second half and secured a share of the spoils with a second-half try from Tiernan O'Halloran, as well as a penalty and a conversion from Craig Ronaldson. 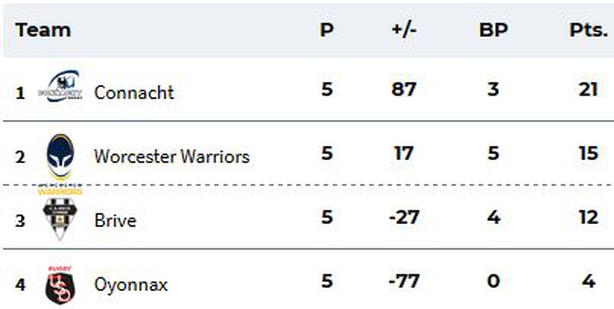