Johann van Graan admitted Munster have had to learn some harsh lessons over the festive period, but the South African is confident they'll click into gear and make 2018 a happy new year.

Van Graan's team were turned over by Ulster on Monday after coughing up a 17-point half-time lead.

They failed to score on the turnaround as the hosts came out swinging, and though Van Graan said that was a bitter pill to swallow, he's keen to take the positives.

"I thought it was a great game of rugby, but like I said before, you've got to hate losing great games of rugby," he told RTÉ Sport's Michael Corcoran.

"It was a big learning experience for our team.

"We don't want to learn too much. We've got to be on the right end of results. There were lots of positives but at the end of the day it was a game we should have won.

"Losing so many guys to injury is a frustration at this stage. We went with a different team up to Ulster. A lot of guys got their opportunity and I thought they used that opportunity.

"For a younger, inexperienced side to be 17 points up away from home at half-time with three tries, I'll take that any day of the week. But to lose that game in that way as a coach and as a team was really disappointing.

"But we got that bonus point out of it. This is still a very very long season.

Next up is a Pro14 clash with Connacht on Saturday night. Munster will be without Billy Holland and Chris Cloete for the derby at Thomond. 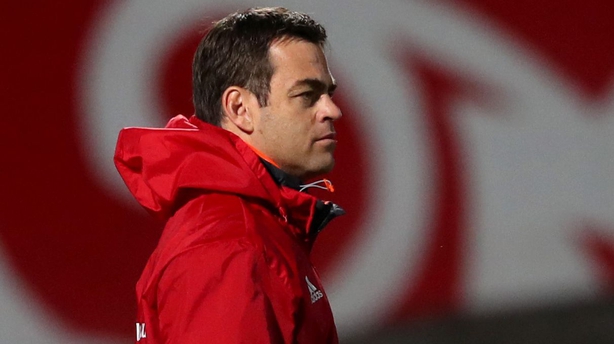 Both players failed their initial HIA assessment after the loss in Belfast and are following return-to play-protocols.

The hosts will also be without hooker Niall Scannell, who picked up a rib cartilage injury, Tommy O'Donnell, who will see a specialist for a shoulder injury and James Cronin, still recovering from a calf injury.

Van Graan is optimistic that centre Chris Farrell will be available after a hamstring problem.

"Our focus is solely on Connacht now," he added. "They're  a very interesting team. I've watched all of their games over the course of the season.

"They've had some good performances and probably some average performances. Over the last few weeks they've been very good. This is a big game for us.

"It's been coming hard and fast. I'e been enjoying every day."