Leinster took a firm grip on Pool Three of the European Champions Cup as they inflicted a first home defeat in 12 months on Aviva Premiership champions Exeter.

Leo Cullen's side moved six points clear at the top of the group by producing the sort of performance that won them three European crowns.

The Chiefs, however, will point to a hugely controversial moment early in the second half, when they felt they should have had a penalty try that would have put them 10-8 ahead after Leinster hooker Sean Cronin was sin-binned for a high, try-saving tackle on Jack Nowell.

Leinster dominated the opening quarter of the game and will have been annoyed to reach the midway point of the half still pointless.

Excellent scrum-half Luke McGrath had a try in the corner chalked off after a foot in touch by Johnny Sexton, who also missed a 45-metre penalty chance.

Exeter's England prop Harry Williams was sin-binned in the 17th minute for collapsing three successive five-metre scrums, but the Chiefs' decision to keep eight forwards in the pack proved a wise move as they destroyed Leinster at the next scrum and another chance for the visitors went begging. However, three minutes later, they capitalised on their one-man advantage when Sexton's cross-field kick found skipper Isa Nacewa lurking on the wing, and, when the ball was recycled, Sexton crossed wide out to break the deadlock.

Exeter responded with a Gareth Steenson penalty after 25 minutes, but Sexton kicked a simple one of his own when Chiefs' Australian scrum-half Nic White was penalised for a no-arms tackle to make it 8-3 to the visitors.

The hosts threw everything at Leinster in the closing stages of the half, but they were thwarted by some outstanding defence.

Exeter failed to take advantage of Cronin's sin-binning in the second half, but, almost as soon as Leinster were back up to their full complement, Exeter finally found the key to unlock the visiting defence. Lovely hands by the back division saw Olly Woodburn put fellow winger James Short over in the corner, but Steenson just failed to find the target with the touchline conversion, so it remained level at 8-8. 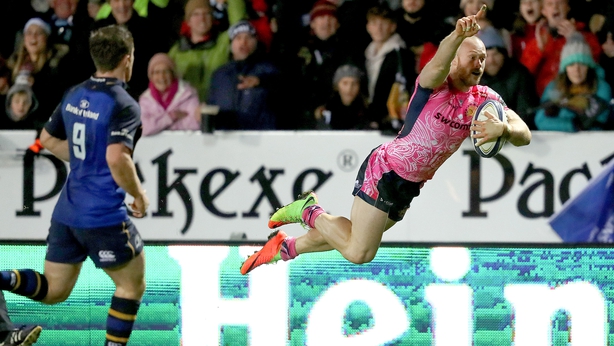 Leinster piled on the pressure as they responded well to that setback, but they had to settle for a penalty after some more tremendous work by the Exeter rearguard, and it was slotted by Nacewa, as Sexton was still recovering from a knock, to nudge them back in front.

A try by number eight Jack Conan 10 minutes from time, converted by Nacewa, after they had gone through numerous phases in attack, gave the visitors some breathing space, and they cleverly saw the game out to deny Exeter even a losing bonus point. 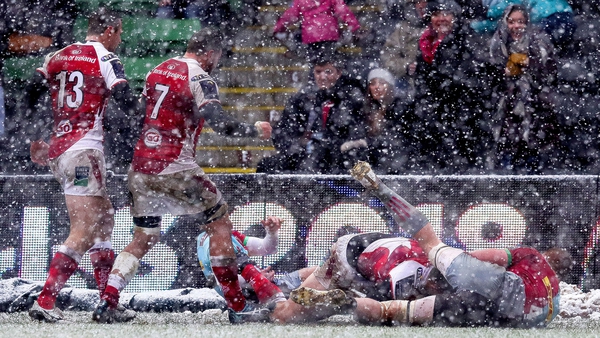