Ireland are "not too concerned" by their depth at out-half in the wake of Joey Carbery's broken wrist, according to coach Greg Feek.

Leinster pivot Carbery trudged out of a much-changed Ireland side's 23-20 win over Fiji on Saturday with a fractured wrist and could now be sidelined for two months.

British and Irish Lions star Johnny Sexton will return to spearhead Saturday's Dublin clash with Argentina, with Munster's Ian Keatley expected to deputise from the bench.

"I suppose, for us we have to just look at that situation, so that when people come to an environment we back them to understand how we play the game," said Feek.

"And if we're developing players in that position or if we have someone come in, we want to make them feel as comfortable as they can.

"Whoever that person is, if they do what is required and can do that with composure then hopefully the rest of the game can fit around that.

"We try not to get too stressed about that. There are always situations in different positions on the pitch where if you lose a couple of players then there could be trouble.

"It's difficult to have depth in every position that's world-class anyway.

"We're lucky we have really good players who can slot in to that position, and we'll see what happens going forward. But at the moment we're not too concerned about it." 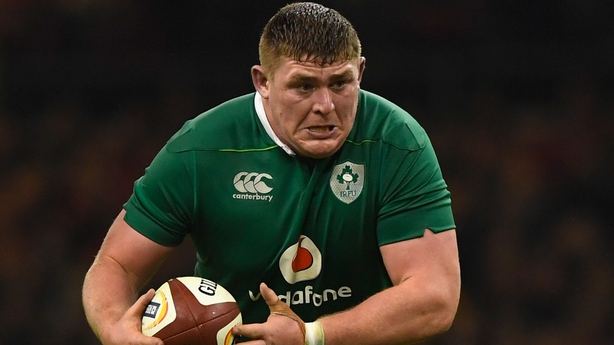 Feek hailed the Wexford native's infectious appetite for learning that has helped him rocket through the Test match ranks.

"He's just got so much energy; he can run all day, talk all day, and that's one thing that's contagious when he's in there," said Feek.

"He loves seeing his team-mates do something really well, one of the first to go over to say well done.

"He thinks deeply too about the game, he's very astute in that respect, and he wants to get things right on the pitch. And he's still got the hunger to learn.

"It's the excitement he has to keep being able to do more, learn and ask for feedback. The really top players are not afraid to get a bit of feedback if they think it will help them get better.

"Some players can get a bit defensive, but Tadhg would just soak it up."